Alongside ensuring profitability, the value chain across industries must transform as the need to leave enough for posterity has become an existential imperative He also said that having dedicated zones in industrial corridors for electronics manufacturing would yield rich benefits, including driving massive job creation in the sector The smart surveillance will stay alert 24x7, identify any out-of-the-ordinary incident, and alert authorities immediately, quickening the process of authorities arriving on the scene to take the necessary action, says Atul Rai, Co-Founder & CEO of Staqu Net Profits Of Manufacturing Companies Surged By 50.2% In FY'22: RBI

Net profit also increased for the information technology (IT) companies, whereas the non-IT services sector continued to record losses at the aggregate level This venture will also produce 3,500 new jobs with major developments in the supply chain Digital Transformation In Manufacturing And Design WPI Inflation Rises To 13.11% In February; Stays In Double Digits For 11th Month India's economic growth is all set to improve over the next 12 months despite the coronavirus pandemic-related problems and global headwinds, says the PwC Annual Global CEO Survey India is poised to capitalise on its natural advantages of rich mineral resources, strategic geographic location, skilled human capital and manufacturing prowess to become the preferred manufacturing destination of the world. The motto of a self-reliant India is only possible if there is large-scale adoption of manufacturing in various sectors of the country. Microsoft's landmark year when it not only entered the exclusive dollar-two-trillion club but also became the world’s most valuable company, saw India operations contributing its share. The company believes that the two factors working in its favour are its business model and its culture, as also seen in its India strategy An easing of COVID-19 restrictions drove demand and boosted sales, indicating the economy was on the path to normalization. 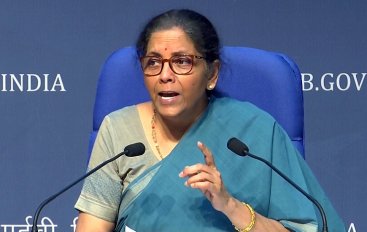 India Cannot Depend On Imports For Essential Goods: FM Sitharaman

She said India will need to build manufacturing centres at scale to reduce dependency in the future.