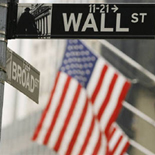 08 November, 2014
Print this article Font size -16+
US stocks fell slightly on Friday, 16 August, and the Dow industrials posted the biggest weekly loss this year as rising bond yields hurt shares paying rich dividends and earnings from retailers disappointed investors.
The S&P 500 utilities sector, down 1.1 per cent, led the day's decline as the yield on the benchmark 10-year US Treasury note rose to a two-year high, making the highest dividend-paying stocks less attractive.
Nordstrom late Thursday was the most recent department store chain to miss revenue estimates. The upscale retailer cut its full-year sales and profit forecasts. Shares fell 4.9 per cent to $56.43. Earlier this week, Macy's reported an unexpected decline in sales and blamed hesitation by consumers.
It was a second week of losses for the major indexes. The Dow fell 2.2 per cent for the week, its biggest decline since June 2012, while the S&P 500 and Nasdaq registered their biggest weekly losses since June, 2013.
"Given how the consumer has been such a powerhouse, I think these are things that make you at least stop and wonder if you should be an aggressive buyer of retail stocks," said Eric Kuby, chief investment officer, North Star Investment Management Corp, Chicago.
The Dow Jones industrial average was down 30.72 points, or 0.20 per cent, at 15,081.47. The Standard & Poor's 500 Index was down 5.49 points, or 0.33 per cent, at 1,655.83. The Nasdaq Composite Index was down 3.34 points, or 0.09 per cent, at 3,602.78.
For the week, the S&P 500 was down 2.1 per cent and the Nasdaq was down 1.6 per cent.
It was a third day of declines for the S&P 500, which also ended just below its 50-day moving average of 1,657, while the Dow ended below its 100-day moving average of 15,102. Breaks below these technical levels could add to selling pressure.
Adding to the market's concern, the Thomson Reuters/University of Michigan's preliminary reading on consumer sentiment in August slipped from July's six-year high.
Other data showed US housing starts rose 5.9 per cent in July, compared with a 9.9 per cent drop in June. Homebuilders Pulte Group and Lennar Corp gained on the news.
Pulte shares rose 2.3 per cent to $16.28, while Lennar advanced 1.8 per cent to $33.88.
Green Mountain Coffee Roasters shares rose 3.3 per cent to $76.38 after Nasdaq OMX said the company will replace Life Technologies in the Nasdaq 100 index on 22 August.
Volume was roughly 4.8 billion shares traded on the New York Stock Exchange, the Nasdaq and the NYSE MKT, well below the average daily closing volume of about 6.4 billion this year.
Decliners beat advancers on the NYSE by nearly 2 to 1 while on the Nasdaq decliners beat advancers by about 13 to 11.
(Reuters)
Tags assigned to this article:
stockmarket news 4 markets wall street nasdaq retail stocks