Thirsting For A Good Fight 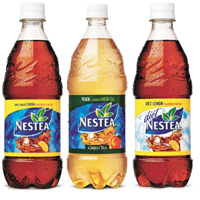 08 November, 2014
Print this article Font size -16+
Call them partners ‘with' arms. the indian beverage arena is preparing for another battle. While the usual suspects Coca-Cola and PepsiCo figure prominently on the battlefield, on this occasion both have formidable partners in their ranks. Recently, Beverage Partners Worldwide (BPW), the joint venture between the world's largest foods company Nestle and the largest beverage company Coca-Cola, launched its first ready-to-drink beverage, Nestea, in India.

The timing of the launch is significant. Nestea enters the Indian market barely three weeks after the board of Tata Global Beverages approved the 50:50 joint venture with PepsiCo India in the area of non-carbonated ready-to-drink health beverages with a mandate to do business globally. Add to this another joint venture for Lipton Ice Tea, where PepsiCo has an alliance with Unilever. Lipton has been trying to perfect its act in the Indian market for some time now, and it is a brand that others are watching closely. BPW executives do not agree that Nestea's launch has anything to do with the competitive scenario. "With great opportunity in the segment and India being a priority market, the entry into this segment was always on the cards," says a company spokesperson.

The action begins against a backdrop where the health and wellness beverages category, which these three ventures target, is predicted to grow at 22 per cent per year and reach Rs 17,350 crore by 2015, according to consulting company Tata Strategic Management Group (TSMG). As of FY09 the size of that segment was estimated at Rs 5,150 crore. As BPW launches Nestea beginning with Mumbai, a market that it claims is the country's largest for iced tea, it could have likely gained a first mover advantage.

But it need not be game, set and match, say rivals. Even as one out of 10 customers visiting coffee chains ask for iced tea, the market is still niche and moving at a painfully slow pace, say rivals. In the overall beverage space, iced tea is an extremely small category, says an executive associated with one of the joint ventures. "It is a tough category, with not enough evolved consumers as a large segment of India still prefers its tea hot," says an expert. But if you consider what the TSMG report says: "Yoghurt drinks, fruit juice, energy and sports drinks are likely to be the fastest-growing beverage categories, reaching eight times their aggregated current size by financial year 2015." BPW executives are confident. "In the past few years, there has been a significant rise in the café culture and also awareness and understanding of iced tea as a category, and we believe this is the right time to tap this opportunity," they say.

But competitive activity does not seem to suggest that. Tata Global Beverages brand, T!on (tea, fruit and ginseng drink) is yet to go national, despite a launch in South India in early-2009. Ricardo Fort, vice-president, marketing, Coca-Cola India, puts up a brave front. At the Mumbai launch he said that Nestea is not competing in the iced tea space, but in the entire space of beverages.  Also, Nestea's India launch is in line with the joint venture's stated objective to be the number one brand in still beverages on a global basis. "We believe that we are offering a great product, a compelling consumer proposition and an extremely competitive price," say BPW executives. Over to the competition.