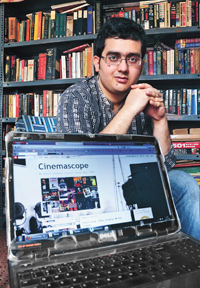 Ravi Agnihotri, ISB (class of 2011)
Ravi Agnihotri gave up his six years of corporate career to do what he really wanted to do in life. He wanted to make movies. "Most people end up doing what they never wanted to do, and if you are good at studies, that is even worse — you end up being an engineer or a doctor," says Agnihotri, who had joined ISB to find the right tools needed for his entrepreneurial streak.

At ISB, Agnihotri started a company called Friday Night Productions and the first movie under his banner is Buddha in a Traffic Jam, which is scheduled for release in November. Co-produced by Hyderabad-based Phoenix Multi-Dimensions and directed by Vivek Agnihotri, the film stars Anupam Kher, Mahi Gil and Pallavi Joshi, among others. "It is about an MBA student who finds himself in a difficult situation because of his professor's mind games and how he manages to come out of it," says Agnihotri. The production house plans to take the movie to international film festivals and screen it across the world's business schools.

"We have already started discussions for our second project with the Anupam Kher Company. It is a satire on business schools and MBA education," says Agnihotri. Now, that's what we call perfect mix and match.

Mansha Tandon and Hariharan Sriram,  IIM Calcutta (class of 2011)
A one-on-one meeting with Trinamool Congress chief Mamata Banerjee (now chief minister of West Bengal) and Hotmail's co-founder Sabeer Bhatia, a 10-km padyatra in Kolkata, and a Web audit for a prominent regional party — these are some of the things that Mansha Tandon and Hariharan Sriram chose to do after two exhausting years at IIM Calcutta.

Both of them spent six weeks interning with Trinamool, working on the party's Web presence and auditing its Web architecture. "We helped them with what their Web activities should be both on email and on social media platforms, and were involved in working with a Web agency and re-jigging the TMC site," says Mansha, a graduate in Economics and French from the University of New South Wales, who joined the B-school to pursue her interests in country risk analysis, sports entertainment, media marketing and politics of development.

Although Tandon lacked experience about Indian politics, Hariharan has always been intrigued by the Indian political system. "We always assume that leaders are corrupt, but being in the system for a few weeks, I realised there are some leaders who can actually put people's faith back into the system," he says. To witness the 2011 West Bengal elections first-hand, he even stayed back in Kolkata after completing the course at IIM-C.

The quizzing enthusiast who had taken various public policy-related courses at the IIM felt that the best learning could come only from seeing in practice what was being taught. "It's not easy to run such a complex organisation as a political outfit, which is distinct from a corporate set-up. The leader can be irreplaceable in some cases," Hariharan adds.

"I cherish the inside view of the political party and how it is parallel with any company that uses marketing techniques and advertising to gather support and create a brand," says Mansha, who hopes to write a novel in the future.

Keisuke Matsumoto, ISB (class of 2011)
Born in Hokkaido, the northern-most part of Japan, Keisuke Matsumoto has always gravitated towards philosophy and religion. When a degree in western philosophy failed to bring him happiness, he decided to join an order of Buddhist priests. "I realised that my experience had been shaped by the traditional Japanese way of thinking, without an understanding of which I would not be able to understand myself," he says. Matsumoko the priest noticed that very few people visited temples even during daytime, and that people perceived temples as high-threshold places. He also observed that working professionals preferred spending time at cafés.

Historically, temples also served as community centres in Japan. In modern times, the cafés have come to serve this purpose. This was the beginning of Matsumoto's project — the Kamiyacho Open Terrace — a café on the Kamiyacho temple premises. The temple café serves tea, coffee and snacks, and exhorts visitors to make donations. The idea is to change people's perceptions about temples as they enjoy their free time on the temple premises.

Following the success of this initiative, Matsumoto decided to enter a business school to master the managerial skills needed for his ambitious plans. India being his favourite country and considering Japan's friendly relations with the country, he chose the Hyderabad-based Indian School of Business (ISB) to imbibe these skills.

Though a Buddhist temple is a non-profit entity, the foundation of its management is similar to any corporate organisation. "Taking advantage of the economic diction that now rules the world, I hope to promote communication between spiritual leaders and the people," says Matsumoto. His hopes are indeed high as he also intends to become "a cultural bridge between India and Japan", and to change the world through Buddhism.

That Matsumoto has real love for India is evident from his son's name, Ganga. "India     has influenced Japan significantly through Buddhism and studying in India has helped me explore my spiritual roots," the priest signs off.

We now look forward to the book about his experience in India that Matsumoto plans to write in the future.

Kumar Ankit, XLRI (class of 2011)
Twenty-three-year-old Kumar Ankit had joined XLRI with a vision — to establish his own venture in rural Bihar. Green Leaf Energy, of which Ankit is the director, now grows pongamia, a plant that flourishes in wastelands and bears bio-diesel seeds. The Entrepreneurship Development Cell of XLRI has helped Ankit in the development of his venture, which is now two years old.

Ankit set up a nursery for 125,000 pongamia saplings in Kotwada village of Gaya district and then transplanted them in wastelands after six months. Hope came in the form of a government circular on the use of wastelands in September 2009. He then approached the Bihar government and, later, the ministry of rural development. The approval of government support under the Mahatma Gandhi National Rural Employment Guarantee Act (MGNREGA) came in June 2010. "I aim to cover 100,000 acres of wasteland in Bihar. This will have an impact on the lives of more than 50,000 farmers," says Ankit, who has earned the moniker ‘CEO' at XLRI.

With the total yield estimated at 100,000 kilo litre, Ankit has already been approached by Indian Oil and Bharat Petroleum for possible joint ventures. "We are currently in plantation phase and have covered 500 acres of land," says Ankit. "The crops will give the farmers a sustained source of income for the next 50 years, and they will be earning around Rs 24,000 per acre every year."

Ankit's venture, if successful, will not only help reduce migration but also provide employment opportunity for the poorest in Bihar. "For me, it's not just a business — it is working for a change in Bihar," adds the young entrepreneur.