Tech-ing It To The Limit 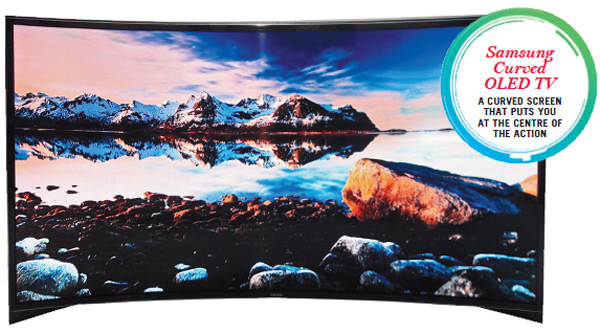 Another is for it to be used in the workplace when several people need to look at or work together on something graphical. Asus and Vizio also showed large Windows 8 tablets, or rather, all-in-ones.
Two-Faced Phone
The Russians have come up with a fascinating concept for a two-screen phone. And when you see the
design you see the sense of it. Why should the back of a phone be doing nothing? One may as well put it to use in some way. The YotaPhone has a regular Android screen on the front while there is an e-ink screen on the back. With a single gesture, like a shortcut, you can enable certain information on the back screen. For example, you could display a map and keep it there while you do other things on the front screen. The same can be done with a boarding pass or ticket. It’s only a thought but a good one.
Flexi Screen
There has been talk of a flexible screen from Samsung for a while now. And at CES 2013 it debuted. Using OLED on a plastic form, Samsung has come up with a bendable phone which could be in widespread use in the future. It looks as bright and nice, but is still a concept to be developed. If you’re wondering what problem a flexible screen is trying to solve, then think of how much you’ve wished for an unbreakable phone. Rolling up the phone could also mean you could fit a bigger screen on a more portable form. The flexibility also has implications for being able to show information in different ways.
Cold Connect
Lots of smart appliances, robots and home security gadgets were showcased at CES. Simplicikey, for example, is an app which lets you remotely control who comes into your home by letting you give permitted people a code to get in. Another device lets your plant send you a message when it needs to be watered. And then, from Samsung, which rather dominated at CES, there’s a smart fridge. T9000 includes integration with Evernote (so you can look at what you want to remember), and read-only Twitter. I’m not sure Indian homes are ready for Evernote-ready fridges, but then the Evernote-ready fridge doesn’t have an announced launch date yet either.