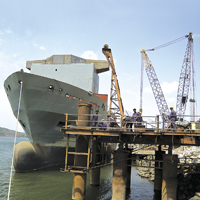 "We are still doing due diligence, but when the core business is not doing that well, it is that much more difficult to finalise, it may take some time," S Hajara said on the sidelines of a conference.

The company is talking to almost all the major shipbuilders in India including ABG Shipyard, Bharati Shipyard and Pipavav Shipyard.

The firm, India's largest shipping company, has reported a net loss for two consecutive quarters hurt by a slowdown in the sector which hit freight rates.

Hajara said industry freight rates are expected to remain under pressure for at least one more year due to excess capacity.