SC Ticks Off Sahara For Not Refunding Rs 24,000 Cr 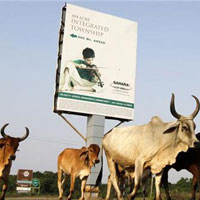 08 November, 2014
Print this article Font size -16+
The Supreme Court on Wednesday, 17 July pulled up Sahara group for not refunding Rs 24,000 crore to investors and said that Sahara chief Subrata Roy and directors of its two companies will have to appear before it if its order is not complied with.

A bench of justices K S Radhakrishnan and J S Khehar also came down heavily on Securities Appellate Tribunal (SAT) for restraining Sebi from taking coercive action against Sahara as ordered by the apex court.

The bench, which said that Sahara group must refund the amount by August 31 or face personal appearance, however, refrained from passing orders as the counsel for Roy pleaded that no such order be passed without hearing him and posted the case for hearing on July 24.

"Comply with our judgement or we will pass orders. Pay the amount or face personal appearance before the court," the bench observed, while expressing displeasure over Sahara group not depositing Rs 24,000 crore with Sebi which will disburse the amount to around three crore investors.

The apex court had on August 31 last year directed the Sahara group to refund the amount by November end. The deadline was further extended and companies were directed to deposit Rs 5120 crore immediately and Rs 10,000 crore in first week of January and remaining amount in first week of February. Sahara has so far deposited Rs 5120 crore with Sebi.

The bench also restrained other courts and tribunals, including SAT from passing any order in the matter.

"No high court or SAT shall pass any order pertaining to our August 31, 2012 judgement," the bench said, adding that SAT had no business to pass order on a Supreme Court verdict.

"We are annoyed by the order of SAT. What business does SAT have to interfere in Supreme Court judgement," it said.

Market regulator SEBI submitted it had approached 21,000 investors on the basis of details given by Sahara group and only 1000 of them responded.

The regulator said it had scrutinised 400 out of the 1,000 who had responded, but only 12 were found be genuine investors in Sahara companies--Sahara India Real Estate Corp Ltd (SIREC) and Sahara India Housing Investment Corp Ltd (SHIC).

SIREC and SHIC along with Roy are facing contempt proceedings in the apex court for not obeying its orders of August 31 last year, to refund the money invested by investors in the two companies.

On February 6, the apex court had allowed Sebi to freeze accounts and seize properties of the two Sahara companies for defying court orders.