Rupee Gains On Foreign Flows, But Falls For The Week 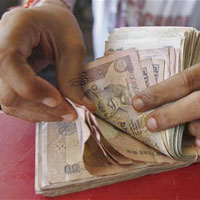 08 November, 2014
Print this article Font size -16+
The rupee rose for a fourth consecutive session on Friday, boosted by strong foreign fund flows into markets, although the local currency fell against the dollar for the week, in line with losses in other emerging Asian currencies.
Scotland's decision to stay in the United Kingdom also eased investor concerns on Friday after a recent run of global political obstacles.
Although the rupee hit a one-month low on Monday, it has steadily risen since then on optimism that hefty foreign fund flows will better help it weather any volatility related to potential U.S. Federal Reserve rate hikes.
Foreign funds bought $484.65 million of government bonds on Thursday, the highest since a record high of $2.65 billion on Aug. 21.
"While some assets may be over-valued, there is still a lot of space to go long on India. I see the rupee strengthening from here in the lead up to the RBI's policy review later this month," said Surendran A.V., head of treasury at Dhanlaxmi Bank in Mumbai.
The partially convertible rupee ended at 60.81/82 per dollar, compared to its close of 60.83/84 on Thursday.
Still, it was down 0.26 percent for the week on account of the big losses on Monday, posting a second consecutive weekly loss.
With few domestic factors next week, traders say foreign fund flows will determine the rupee's direction ahead of the Reserve Bank of India's policy review on Sept. 30.
Foreign funds have bought debt and equity worth nearly $3.61 billion so far in September, as per regulatory data, bringing their total for the year to $33.66 billion.
In the offshore non-deliverable forwards PNDF, the one-month contract was at 61.14/19 while the three-month contract was at 61.63/73.
(Reuters)
Tags assigned to this article:
dell honeywell payu yahoo weather app ali raza