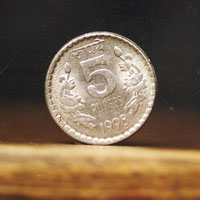 08 November, 2014
Print this article Font size -16+
Government bonds rallied and the rupee was marginally stronger on Wednesday after the RBI said late on Tuesday it will buy bonds and eased bond-holding rules for banks to ease tight cash conditions. The rupee recovered by 10 paise to 63.15 against the US dollar in early trade after RBI announced measures to curb volatility and ease liquidity situation.
Forex dealers said besides dollar selling by exporters, the Reserve Bank yesterday announced a slew of measures to ease liquidity, including Rs 8,000 crore bond buyback, to ensure adequate credit flow to the productive sectors of the economy, which also supported the rupee. They said, dollar's weakness against euro overseas also helped the domestic currency.
Also Read: RBI Eases Tight Money Policy
The rupee had ended 12 paise lower at 63.25 after hitting a fresh low of 64.13 against the US dollar in the previous session.
The BSE benchmark index Sensex rose sharply by 321.66 points, or 1.76 per cent, to 18,567.70 in early trade. The benchmark 10-year bond yield fell as much as 69 basis points to 8.21 per cent. It was last trading at 8.28 per cent.
Interest rate swaps were also sharply down. The five-year OIS was down 60 basis points at 8.35 per cent, while the one-year was down 44 bps at 9.45 pct, traders said.
(Agencies)
Tags assigned to this article:
economy india rbi dollar rupee weak rupee rupee crisis