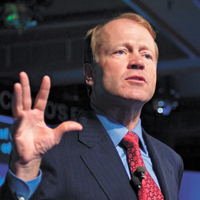 Through the 1980s and 1990s, Cisco was a networking company. Its core business was making routers and switches. All the major acquisitions in the 1990s were related to networking; they strengthened what was already a formidable portfolio of networking products. But sometime around the turn of this century, probably buoyed by the spurt in Cisco's business and market capitalisation, Chambers began to take the company in a different direction. It started pushing into areas that lie close to networking, a move that transformed Cisco within a few years.

In 2003, Cisco bought Linksys, the wireless networking company based in southern California. Although Linksys was a networking company, its product was installed at home rather than in the enterprise. It was the first serious attempt by Cisco to reach the consumer and by no means the last. Over the next decade, Cisco bought several companies that were selling products to consumers, some of them quite removed from its main business of routers and switches. The largest of them was Scientific Atlanta, a company that made set-top boxes. Cisco paid a cool $6.9 billion for it.

Just over two years ago, Cisco accelerated this strategy of ‘consumerisation'. It called the new strategy ‘market adjacency', which meant moving into markets that are near its core competence, but are capable of evolving into at least a $1-billion business for the company. On paper it made sense, but in practice the strategy did not go as well as intended.

break-page-break
Starting from a small list, market adjacencies began to expand and at one time reached 50. There is a difference of opinion on how well this strategy has worked. While Cisco maintains everything it did was related to the network, industry observers did not think so. "We deliberately sought to create and bring to market connected groups of networking technologies," says Naresh Wadhwa, president and country manager of Cisco India and Saarc. Cisco calls them architectures. Currently, it focuses on four architectures: collaboration, video, borderless networking and data centre virtualisation.

Now, some of these businesses may be on the block. Analysts have been speculating what it would sell. It is not surprising that everyone agrees on what Cisco should now do: sell off its consumer divisions and focus on the enterprise. Sell off Linksys, Scientific Atlanta and similar businesses. Probably, stop making home versions of products such as Telepresence; become an enterprise networking firm once again. "Investors may favourably perceive actions such as a reduction in target markets to a more manageable number, from over 40 to less than 10," says UBS Securities analyst Nikos Theodosopoulos in a recent report. Cisco has announced the shutting down of its Flip camera divsion.

In his memo, Chambers had mentioned five core areas the company would focus on: core routing, switching and services, collaboration, data centre virtualisation and cloud architectures, and video. "We will address with surgical precision what we need to fix in our portfolio and what we need to better enable," he said in the memo. It seems as if the Cisco chief and the analysts agree on what he needs to do.

Core Issues
It is not as if everything is fine in Cisco's core areas. Here too, Cisco has made things too complex in some ways, while simplifying things in some other ways. Analysts feel Cisco had introduced products at a pace that became difficult to manage. It followed a development philosophy that is complex, too. Its networking products are led by hardware, a substantial portion of which has been acquired at various times. Each one of these boxes thus uses proprietary software. This combination makes Cisco's network difficult to manage, against its nearest competitor Juniper, which uses a standard operating system throughout its network. Cisco was probably helped by people's familiarity and trust with its technology, but its methods may not work for long as competition has got intense.

It is harsh to say Cisco does not innovate, but analysts and some of its competition feel so. "Cisco dominated the IP industry for the past 15 years, and we have not seen a major innovation in the industry," says Brocade CEO Mike Klayko. Cisco denies this, citing Telepresence and Unified Computing System as major recent innovations. Yet, a lot of its troubles are a result of perceptions. Would it be able to change them?

Cisco is now at a key stage in its history. Chambers himself is not in an unassailable position as there are reports that some investors may turn activist. The memo is a clear acknowledgement of this threat, but he could still manage a re-invention of the company. "There was nothing wrong with Cisco's strategy," says a former Cisco top executive, now with a competitor. "But the execution was flawed." Chambers had agreed to this in public. Give him another six months.