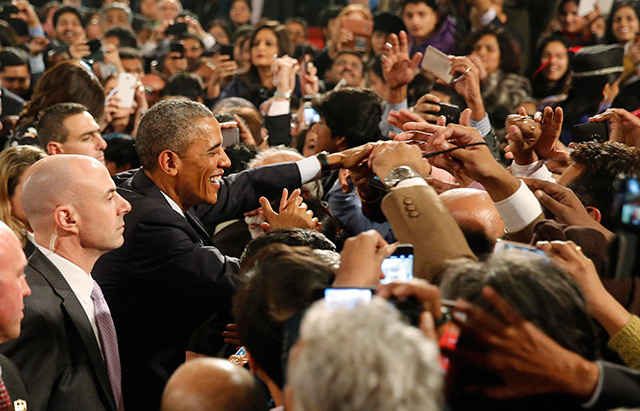 05 February, 2015
Print this article Font size -16+
US President Barack Obama weighed in on one of India's most sensitive topics as he wound up a visit on Tuesday, making a plea for freedom of religion to be upheld in a country where relations between Hindus and minorities have come under strain.
Obama made no direct reference to Prime Minister Narendra Modi's Hindu nationalist Bharatiya Janata Party (BJP), whose rise to power last year has emboldened some Hindu groups to assert themselves in a country with a history of religious strife.
"Your Article 25 (of the constitution) says that all people are 'equally entitled to freedom of conscience and the right freely to profess, practice and propagate religion'," Obama told a townhall address to mostly young Indians in New Delhi.
"In both our countries, in all countries, upholding this fundamental freedom is the responsibility of government, but it's also the responsibility of every person."
Obama further said that no society is immune by the darkest impulses of man and that more often religion has been used to tap into it.
Modi's rise to power has emboldened right-wing activists to openly declare India a nation of Hindus, posing a challenge to its multi-faith constitutional commitment. About a fifth of India's 1.27 billion people identify themselves as belonging to faiths other than Hinduism.
Modi has warned lawmakers from his own party to stop promoting controversial issues such as religious conversions and to focus on economic reforms.
"We have to guard against any efforts to divide us on sectarian lines or any other thing," Obama said.
Obama bonded warmly during his three-day trip with Modi, who until a year ago was persona non grata in Washington and was banned for nearly a decade from visiting the United States after deadly Hindu-Muslim violence in a state he ruled in 2002.
The US president's visit has been widely seen as a bid to forge a relationship that will help balance China's rise by catapulting democratic India into the league of major world powers.
In his speech on Tuesday, Obama described the relationship between India and the United States as potentially "one of the defining partnerships of the century".
'Best Partner'
"India and the United States are not just natural partners - I believe that America can be India's best partner."
"Of course, only Indians can decide India's role in the world," he said, adding, "But I'm here because I am absolutely convinced that both our peoples will have more jobs and opportunity, our nations will be more secure, and the world will be a safer and more just place when our two democracies stand together."
Obama also said the US supported India's inclusion as a permanent member in the UN Security Council.
Against the backdrop of China exerting its influence in South China sea, Obama said freedom of navigation must be upheld in the Asia Pacific and welcomed a greater role for India.
"The United States welcomes a greater role for India in the Asia Pacific, where the freedom of navigation must be upheld and disputes must be resolved peacefully," he said.
On Monday, he became the first US president to attend India's annual Republic Day parade, a show of military might that has been associated with Cold War anti-Americanism.
Obama's presence at the parade signals Modi's willingness to end India's traditional reluctance to get too close to any big power. Instead, he is seeking close ties with them all, even as he pushes back against China and take sides on other global issues.
During the visit, the two sides sealed a clutch of deals to unlock billions of dollars in nuclear trade and deepen defence ties, and Obama pledged $4 billion in investments and loans to release what he called the "untapped potential" of a partnership between the world's largest democracies.
Most significant was an agreement on issues that, despite a groundbreaking 2006 pact, had stopped U.S. companies from setting up nuclear reactors in India and had become one of the major irritants in bilateral relations.
Endorsing Reform
Obama said the United States would stand first in line for the trade and investment opportunities that will spring from the economic reform drive under Modi.
"America wants to be your partner in igniting the next wave of Indian growth. As India pursues reforms to encourage more trade and investment, we'll be the first in line," he told the townhall.
The United States views India as a vast market and potential counterweight to China's assertiveness. It has long been frustrated with the pace of New Delhi's economic reforms, but Modi has injected a new vitality into the economy.
Modi told a meeting with business leaders on Monday that US investment in India had accelerated in recent months and vowed to do more to slash the country's notorious red tape and make it one of the world's easiest places for business.
Obama's second visit to India is the latest upturn in a roller-coaster relationship with Washington that a year ago was scarred by protectionism and a fiery diplomatic spat.
Praising the non-violence tenets of Mahatma Gandhi, Obama touched during his townhall speech on the treatment of women, an issue that has troubled India since the horrific gang rape and murder of a student on a bus in New Delhi two years ago.
"Every daughter deserves the same chance as our sons," he said. "And every woman should be able to go about her day — to walk the street, or ride the bus — and be safe and be treated with the respect and dignity. She deserves that."
(Agencies)
Tags assigned to this article:
top 2 bjp barack obama narendra modi mahatma gandhi gujarat riots obama india visit article 25 religious freedom