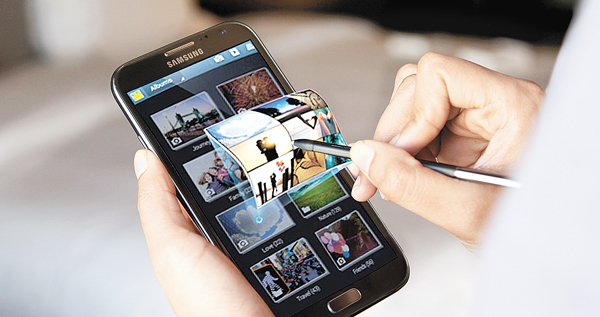 08 November, 2014
Print this article Font size -16+
Too big” or “What is it?” is a refrain you will hear often from those who first see the Galaxy Note, now in its second avatar and tremendously improved in many ways. But just as many are instantly won over by the very form factor that surprises the others. There seems little doubt that the Note II will exceed the original in popularity.
The ergonomics on the Note II have been rethought and we now have a larger device, but easier to hold. Users who want its functionality have to adjust to carrying this very handy tablet-phone.

Calling on it looks awkward but the speaker, headphones and a Bluetooth device can come to the rescue of those who do a lot of calling. I’d urge potential buyers to weigh their phone usage and see if they are likely to use the Note’s smart features rather than merely making calls.
This phone is mostly a larger version of the S3 and Samsung still sticks to its plastic back, but the device still manages to look rather good, specially in grey and if the professional looking flip top is used.
That will be extra. All looks and dimensions are forgotten when the 5.5 inch HD Super Amoled 1,280x720 pixel screen comes on. It’s pleasing to the eye. The heart of this super gadget is the stylus or S Pen. On the Note II, it’s been improved to the point of butteriness and is impressive at handwriting recognition. The pen slides into a slot and is safe there, beeping to alert you if you walk off without it tucked in.
The pen has many tricks up its sleeve such as giving you information, text and pictures when hovering.
Or taking screenshots and using gestures with the press of a subtle button. In considering this device, it’s really the stylus that matters and Samsung believes it’s the creative types that will enjoy it most. I however, cannot draw to save my life, but ended up buying the device because I found it fantastically handy to just reach out and quickly write notes and lists while at the same time enjoying the large expansive screen and its beautiful colours.
The Note II is a full spec powerhouse with a 1.6GHz quad-core processor, 2GB of RAM and 16GB of internal storage with a micro-SD card for expansion. It’s running Android 4.1.1 Jelly Bean. An update to 4.2, which has recently been released, is awaited and should be interesting because it brings more features including a new keyboard with a swipe action that shows the word as you swipe. There’s a giant 3100 mAh battery which can last up to one and a half days. And it’s user replaceable. The camera is an 8 megapixel with lots of features and has 1080p HD video and playback. Samsung’s own TouchWhiz interface combines with Android Jelly Bean to give an exceptional amount of features. There’s the split screen mode with which you can share two apps on the screen.
The Note II costs Rs 39,500, but is value for money for the features it offers. Rather unique ones, when it comes to it. It’s an innovative, productivity-oriented device for those who are happy with large screens.
Voulez Vous Vu?
It’s interesting to think that LG is maker of both the much-talked about Google Nexus 4 giant phone and the thoroughly-odd Optimus Vu ‘phablet’. Not wanting to be left out of the phablet race, LG came up with a peculiar squarish device with a 5-inch screen. At dimensions of 139.6 x 90.4 x 8.5 mm, it’s difficult to hold unless you put it down flat on your palm and stand very still. It may look pretty enough on the table or on a dock, but to take this one up to your ear is stretching it.
Talking of pictures, the Vu has a nice 1024x 720 pixel screen with natural colours and viewing angles, though you’ve to watch out for the auto brightness. It also has an 8 megapixel camera which takes clear pictures. It runs on a 1.5GHz Nvidia Tegra 3 quad-core processor with 1GB RAM and 32GB space and a microSD slot. There’s a 2,080 mAh battery that you cannot get at, but it doesn’t last over 8 hours. It’s still on Ice Cream Sandwich. Other than its shape, the Vu has a good build; neither too heavy nor too light. It has a textured back that will help it not to slip. But it has no slot for its biggish stylus (proudly called the Ruberdium for some reason) and this means anyone who uses it has to find some way of carrying it without losing it. Price: Rs 34,500.
Type Absolutely Anywhere
This iPad accessory was quite a sensation when it launched in the US a few months ago. It’s designed to match the way the iPad looks, continuing the feel of the back with its own cover.

When it’s closed, the iPad and cover look like a small notebook or Ultrabook, and weigh almost as much as well. One obvious problem is that the back of the iPad is not protected and can pick up scratches over time. If you use a separate skin, you lose the look and add a bit of weight. That said, many users have still liked the Logitech Ultrathin. When you open it and put the iPad into typing position, you immediately see why. The iPad sits ever so firmly in place and at a wonderful angle.  The cover is ‘smart’ in that it switches the iPad off when closed. But unlike Apple’s flexi Smart Case it doesn’t clamp on hard to the iPad’s magnets. It is also not for someone who uses the iPad for a lot of reading. But investing in a case besides the Ultrathin, priced at Rs 6,599, will push up the cost quite a bit.
Designed For Windows 8
Tech reviewers who got their hands on the HTC 8X ahead of the global launch have been admiring the way it has been crafted. The back of this handset is some sort of softened polycarbonate rubbery material that’s great to touch. But more than that, the fact that it wraps itself into the sides of the handset to meet the Gorilla glass on the front makes the 4.3-inch phone nice to hold. The volume control, camera button and micro SIM slot are on the right, and the headphone slot and the power button on the top. But here’s my main crib with this beautiful phone: the buttons, especially the power button, are so subtle that you have to keep feeling along the edge for them.
That said, it’s still a great phone. It’s running a dual core Snapdragon S4 1.5GHz processor with 1GB of RAM and 16 GB storage — no micro-SD slot. More storage would have been nice, but users will be encouraged to use Windows SkyDrive to store their stuff. The 8X feels fast. I never found any lag no matter how much I played around with the tiles and swiped around. It has a 1500 mAh battery that wasn’t exceptional. The 8-megapixel primary camera is good. These days everyone’s keeping low-light situations in mind, so this camera has an f/2.0 aperture. There’s no burst mode. The front camera, also with an f/2.0 aperture, is nice because of its wide-angle view.

The Super LCD-2 screen is something HTC is particularly proud of. It’s 1280x720 with a pixel density of 340 ppi. There’s extra boost sound with Beats Audio.
The rest of this phone is all about Windows 8. If you’ve used a Windows 7 phone, it will look instantly familiar and as you start exploring it, you’ll find the additions. For instance, you can set up sharing with friends or family in different Rooms, sync content with your Windows PC using SkyDrive and there’s a new Kid’s Corner, a closed-off area for kids. The bigger changes are under the hood, in fact to the core of the OS, which make it work with other devices, most importantly your computer.
With Windows 8 on the phone, Microsoft is working towards an ecosystem it hopes will be compelling. If you want to switch to Windows 8, the HTC 8X is a great choice at Rs 35,023, though it will compete with Nokia’s Lumia 920, Samsung’s Ativ and HTC’s own 8S.
One For India
Continuing on what seems to be a launching spree, HTC has one specially for India. For one, it’s supposed to be an Indian colour, Radical Yellow, sort of orange-yellow, warm and friendly like a fried egg. I do hope this colour ends up being widely available, because the only other colour is black.
HTC’s made for India phone, the Desire SV, has something Indians love — a dual SIM capability. The dual GSM micro SIMs fit under the back panel. The inside of the phone is neat and well-engineered, unlike many handsets that look great on the outside and hide a holy mess on the inside. It’s reassuring to see the changeable battery and a micro SD slot, and to feel the solidity of the device, overall.
The Desire SV is a 4.3-inch phone and has a nice LCD2 screen working at 480x800 resolution with a density of 217 ppi, according to GSM Arena. It runs on a dual core 1.5GHz Qualcomm Snapdragon S4 processor with 768MB of RAM and has 4GB of internal memory. Seems too little for a phone that Indians will fill with music and video, as one would expect. The phone is on Android ICS, upgradeable to Jelly Bean. The camera is an 8 MP with f/2.2 aperture and an LED flash. It’s fast and outdoor pictures are fine. Amazingly, there’s no front facer and hence, no video chatting or self shots. It’s priced at Rs 22,590.
Now In Plus Size
When the HTC One came out into the world earlier this year, everyone loved it. It was big, looked classy, had a lovely screen, an excellent camera, and rode into town on a quad core processor, becoming a serious challenger to the Galaxy S3 and the iPhone 4S.
HTC figured it wouldn’t let go of a good thing and decided to give the One X+ some more power.

Wisely, it decided not to tamper with its looks. It has the same design, unibody build and the textured matt finish back in egg-shell white and in black. Contrasting with that is the jet black of the large 4.7 inch 1,280x720 pixel Super LCD2 screen. But now there’s a more powerful processor to run it: 1.7GHz quad core Tegra 3. The One X+ has a whole lot of storage space — 64GB of it. HTC says this phone is 27 per cent faster than its predecessor and has 37 per cent more life due to its 2100 mAh battery. The One X+ is on Jelly Bean, which in itself speeds things up and adds features to the device, including Google Now. At Rs 40,190, the One X+ is rather + on price. Watch out for a reduction sometime.