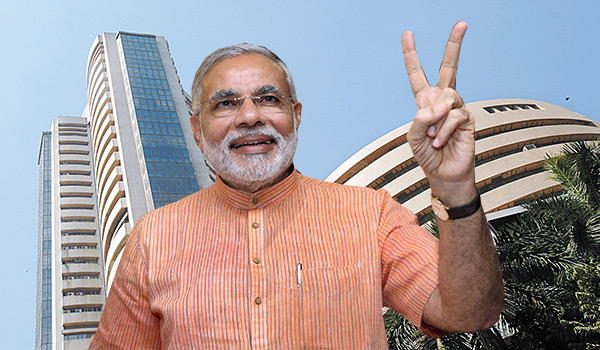 08 November, 2014
Print this article Font size -16+
The BSE Sensex and Nifty hit record highs on Friday (9 May), posting their biggest daily gains since September on hopes the opposition Bharatiya Janata Party would win a majority in elections ending next week and form a stable government.  Blue-chips like ICICI Bank shot up and the BSE benchmark Sensex zoomed over 650 points to breach the crucial 23,000-level for the first time.
Frenzied buying was witnessed across sectors, mainly in banking, realty, power, refinery and capital goods.
Share brokers attributed the surge to BJP prime ministerial candidate Narendra Modi exuding optimism in an interview last night that BJP will get a clear majority and form the "strongest and the most stable government" since Rajiv Gandhi's government in 1984.
Indian markets are so confident the opposition party led by Narendra Modi will win the country's elections that brokers fear anything short of a decisive victory could spark the worst sell-off in years.
But caution about the vote results may prove warranted. Most investors were caught off guard in the past two general elections - in 2004 and 2009 - as opinion polls got it badly wrong.
Now some precautionary moves are being made. Customers say at least four brokerages have raised margin requirements due to concern there could be intense volatility after election results are unveiled on Busine May 16.
The stock market regulator has asked exchanges to test their trading systems, according to an agency official, especially new mechanisms put in place last year to deal with market volatility. The Securities and Exchange Board of India (Sebi) did not reply to a written request for comment.
A surprise could knock both shares and the rupee. The gains stem from the assumption the BJP and its National Democratic Alliance (NDA) will win a majority, or near it, making Modi India's prime minister.
Modi Win Pivotal
Sectors seen most likely to benefit from a Modi win led the gains. Infrastructure shares such as Ambuja Cement surged, while the NSE's banking sub-index hit a record high on hopes a new government would frame policies that would aid the economy.
"As the elections D-day is approaching closer, markets are rallying on anticipation of a favorable outcome," said Dinesh Thakkar, Chairman & Managing Director of Angel Broking.
Riding on continuous foreign fund inflows, the 30-share Sensex hit a new record of 23,048.49.
However, it settled the day a few notches lower at 22,994.23 -- record closing high -- registering a rise of 650.19 points or 2.91 per cent, the biggest gain in almost eight months. On September 19 last year, the barometer soared over 684 points.
The previous all-time high record for the Sensex was 22,939.31, recorded on April 25.
The 50-share Nifty of NSE set a historic high of 6,871.35 but ended the day at 6,858.80, a gain of 198.95 points or 2.99 per cent from its previous close.
"Unmistakably, the focus remains on the approaching D-day, i.e. May 16 when the election verdict would be announced. But even before that, the market would react to exit polls numbers as it starts trickling in once the final phase of polling gets completed by May 12," said Sanjeev Zarbade, Vice President, Private Client Group Research, Kotak Securities.
ICICI Bank at 6.63 per cent was the best performer. Tata Power was the next best 5.57 per cent, Hindalco was up 5.35 per cent, HDFC Bank 5.31 per cent), BHEL 5.21 per cent, Coal India 5.07 per cent. Of the 30 Sensex stocks, 27 rose sharply on good demand while the remaining three declined.
Prominent gainers of the day also included Axis Bank 4.87 per cent, ONGC 4.13 per cent, Maruti Suzuki 4.13 per cent, HDFC 4.07 per cent, Reliance Ind 3.93 per cent, Hero Motocorp 3.92 per cent, SBI 3.88 per cent, M&M 3.86 per cent, Tata Steel 3.64 per cent, Larsen 3.29 per cent and Bajaj Auto 2.56 per cent.
Index heavyweight Reliance Industries Ltd gained 3.5 per cent while Oil and Natural Gas Corp. surged 3.2 per cent.
However, some exporters under-performed, as the rupee strengthened to above 60 per dollar to near one-month highs hit on Thursday. Sun Pharmaceutical Industries Ltd fell 0.07 per cent while Tata Consultancy Services Ltd fell 0.1 per cent.
"Going into the next week,... focus will be firmly on the exit poll numbers due on Monday evening as well as on the final election results on Friday. A decisive verdict from the elections will be a long-term positive for the markets," said Zarbade.
Among BSE sectoral indices, bankex rose by 5.34 per cent, followed by realty 4.38 per cent, power 4.12 per cent, Oil&Gas 3.44 per cent, consumer goods 3.34 per cent.
"We believe markets will continue to have Modi wave.
Today's rally was led by financial. Bankex moving up by closer to 5 per cent, mainly led by renewed buying in private sector banks," said Rahul Shah, Vice President, Equity Advisory Group, Motilal Oswal Securities.
Small-cap and Mid-cap indices also rose by 0.72 per cent and 1.47 per cent respectively on good demand from retail investors.
The market breadth turned positive as 1,610 stocks finished with gains, 1,146 stocks ended with losses while 146 ruled steady. The total turnover rose to Rs 3,238.55 crores from Rs 2,299.87 crores yesterday.
Foreign institutional investors (FIIs) bought shares worth a net Rs 363.24 crore yesterday, as per
provisional data from the stock exchanges.
Most Asian stocks ended higher. Key indices in Hong Kong, Singapore, South Korea and Japan ended higher by 0.12- 0.31 per cent, while indices in China and Taiwan eased by 0.21- to 0.46 per cent.
European stocks were trading lower. Key benchmark indices in France, Germany and UK eased by 0.41-0.54 per cent.
(Agencies)
Tags assigned to this article:
news 4 markets sensex nifty narendra modi 2014 elections election 2014 record high namo