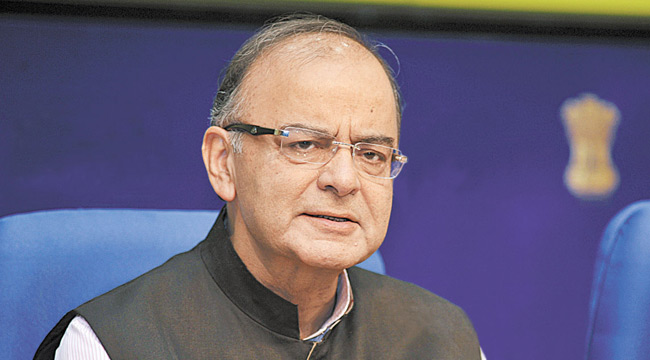 20 April, 2015
Print this article Font size -16+
Finance Minister Arun Jaitley has sought urgent implementation of common reporting standards on automatic exchange of information globally, asserting that it is the only way to tackle the challenges posed by black money.
The problem of offshore tax evasion and flow of illicit money can be addressed only by the free flow of financial account information exchanged among countries on an automatic basis, Jaitley said in his intervention on "International Tax Issues" during the annual Spring Meeting of the International Monetary Fund and the World Bank.
"We strongly feel that there is a need to ensure that the Common Reporting Standards on Automatic Exchange of Information should be implemented on a fully reciprocal global basis and those countries which have not yet committed to the timeline of 2017 or 2018 should do it without any further delay," he said.
The problem of black money and illicit flow to offshore jurisdictions and tax havens can be addressed only if this is implemented at a global level, he said.
Jaitley said the Global Forum should monitor the implementation of common reporting standards on exchange of information and ensure that every country is effectively implementing and have necessary legal, regulatory framework and are also exchanging information in practice.
Although exchange of information on "request basis" has resulted in improving transparency, its scope is limited, he argued.
Offshore financial centers and tax havens are obliged to provide information only when investigation in a particular case has already commenced, he noted.
Jaitley said Base Erosion and Profit Shifting (BEPS) has been a cause of concern for developing and emerging economies for long as it erodes their tax base depriving them of much needed resources for developmental activities.
"It is also unfair to general taxpaying public. It also provides an unfair competitive advantage to Multinational Enterprises (MNEs) vis-a-vis domestic companies which have no opportunities for BEPS strategies," he said.
India welcomes the progress made in BEPS project incorporating the participation of 8 non-OECD G20 countries, he added.
Upbeat On Growth
The Group of 20 leading economies struck a hopeful tone on the outlook for global growth on Friday, even as officials fretted that Athens' inability to strike a deal with its lenders could upset Europe's tentative recovery.
In a communique after a two-day meeting, G20 finance ministers and central bankers welcomed brighter economic signs in rich nations, but lamented weakness in emerging markets.
"Risks to the global economy are more balanced since we last met," the finance officials said. "Near-term prospects in advanced economies, notably the euro area and Japan, have improved recently, while the US and UK continue to record solid growth, which could support a stronger global recovery."
Still, the group of developed and emerging market nations, which represent around 80 percent of global economic output, cited challenges from an array of sources, including exchange rate volatility and geopolitical tensions.
Greece was not mentioned by name in the communique and Turkish Deputy Prime Minister Ali Babacan, speaking on behalf of the G20, said the issue of Greece did not feature in the formal discussions.
(Agencies)
Tags assigned to this article:
black money greece g20 arun jaitley othertop2 ali babacan