In The Deep End 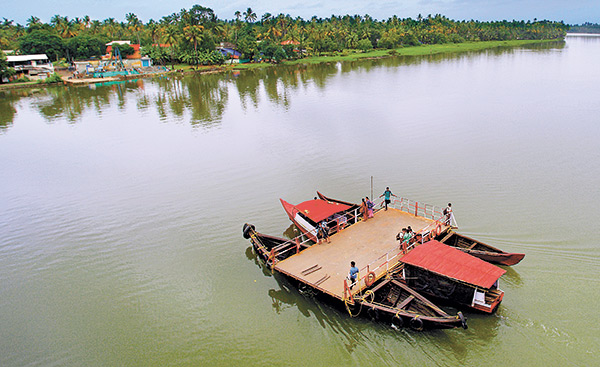 08 November, 2014
Print this article Font size -16+
Last October, turbines for the NTPC plant in Farakka, West Bengal, needed to be transported through National Waterway 1 (Allahabad-Haldia) due to their large dimensions and 300,000 tonne weight. It took 45 days for the two boats to get from Allahabad to Kolkata, a distance which should not have taken more than 10 days at the most. The reason? The shallow draught along parts of the Ganga believed to be navigable by fairly large vessels.

India has failed to promote and maintain the cheapest and greenest mode of ferrying goods and people — water transport. Even though in the 1980s, of the 14,500 km of navigable waterways in India, 4,500 km were declared commercially viable, they are still “under development”. Currently, less than 3,000 km are used — constituting a mere 0.4 per cent of the total transport share and an even lower 0.15 per cent of freight movement in the country.

Waterways in the Netherlands amount to just 5,200 km, but account for 60 per cent of the freight movement in the country. Germany has 56 of its 74 metropolitan regions connected by waterways and has 100 inland ports, whereas India — with a landmass and coastline many times that of Germany’s — has only 190 ports in all, with not even a handful that are inland ports. Again, while the US uses over 19,000 km of commercially navigable inland and coastal waterways to transport 8.3 per cent of the country’s freight, in China that number stands at 8.7 per cent.

Proposals intended to promote waterways in India rarely take off, like the Mumbai transport department’s attempts to run a ferry service between Borivili and Nariman Point. First proposed in 1983, the project cost is estimated at around Rs 1,000 crore today. It has been discussed several times, been cleared by the Union environment ministry and the Maharashtra State Road Development Corporation has even gone to the extent of issuing tenders twice over the past four years — but it is nowhere close to starting.

At the national level, in the 1980s the Union government had announced six national waterways (NW) — three of which are operational, two are stuck in bureaucratic processes and one’s future is uncertain. Of the three operational NWs, the one on the Ganga is the most popular for cargo and river tourism, largely on account of its proximity to existing or proposed industries, thermal power plants and shrines. Government officials believe this is the best developed and maintained waterway in the country.

It’s All Potential
Across the globe, water transport is recognised as the most fuel- and cost-efficient and the least damaging to the environment. It is largely used to ferry cargo because it makes economic sense. One litre of fuel can move 24 tonne over a distance of one km by road, 85 tonne by rail and 105 tonne by water. Similarly, one horsepower of energy can move 150 kg by road, 500 kg by rail and 4,000 kg by water. “The horsepower-load ratio in water transport is far more viable than any other mode of transport,” says R.P. Khare, chief engineer, Inland Waterways Authority of India (IWAI). On the cost side, he says it takes around Rs 6 crore to develop and maintain one km tonne of waterway, 1.5 to 2 times that for rail and 2 to 3 times that for roads.

Water transport, for the most part, is nonexistent in India even after 25 years of the passage of the Inland Water Transport Act. In 1986, the Act was implemented, IWAI was set up and the Ganga-Bhagirathi-Hooghly system became the first NW. Yet, it is hard to name even half a dozen companies utilising water transport for goods or people. According to K.J. Sohan, former Kochi mayor and member, standing committee on town planning, Kochi Corporation, the neglect of waterways can be blamed on the lack of a “godfather” and the economics of patronage. “The most coveted mode of transport is road transport — and the exponential growth of this sector has been largely due to the automobile industry. Unfortunately, there is no boat-making industry.” Sohan says he submitted a proposal to the Centre for the revamp of Kochi’s waterways under the Jawaharlal Nehru National Urban Renewal Mission. “I never got any response and today the city is plagued with congested roads and many diversions with the upcoming metro project,” he adds.

Incidentally, Kochi’s ferry service, operating from 50 jetties and used by thousands of people for going to work, shop or school, has boats that are noisy, rickety and polluting, in the absence of a policy and funding to improve services.

Within the IWAI — the nodal agency on waterways set up under the ministry of shipping — there is more talk of potential than actual utilisation. As per the authority’s estimates, NW 1 is located close to 15 sanctioned and proposed coal-based power plants that could provide 25 million metric tonnes of cargo per annum (mmtpa). Fertilisers from the existing plants amounting to around 10 mmtpa can be moved on waterways as, of the 25 mmtpa consumed in India as a whole, Uttar Pradesh, Bihar and West Bengal use up 10 mmtpa. In 2010-11, around 33 million tonne (mt) of foodgrain was transported using rail and road networks, of which 30 mt was inter-state transportation. IWAI says waterways could supplement rail and road networks as in 2010-11 around 3 mt of grain could not be transported.

A Deluge Of Problems
The reasons cited for poor development of water transport are lack of industrialisation along river banks, shortage of manpower in IWAI, lack of political will, poor technology, lack of incentives and an income assurance to attract investment. The lack of development of the water sector can also be blamed on the nature of Indian rivers and slow-moving vessels. Rivers in India carry a heavy silt load and are prone to flash floods. The fact that most water transport is slow moving does not appeal to business enterprises, says S. Sriraman, a professor of transport economics, Mumbai University.

“A major drawback in Indian waterways transport is the lack of integration with other modes of transport,” he says. Explaining the need for integrated transport systems, the professor cites the National Transport Policy’s emphasis on the need for multi-modal integrated transport systems in urban India to reduce congestion — a fact rarely taken into account when planning roads, railways or metro systems, as evident from the ever-increasing congestion.

Funds crunch has been the main hurdle for water transport. For 2013-14, it was allocated Rs 300 crore, but by June the sum was reduced to Rs 200 crore. Before the 11th and 12th Five-Year Plans, the total budgetary allocation for IWAI did not exceed Rs 100 crore for a five-year period. The National Transport Development Policy Committee (NTDPC) report notes that since IWAI’s inception in 1986, until 2012, Rs 886 crore was spent on NW 1, 2 and 3 and Rs 150 crore on schemes and subsidies. But with the 11th Plan’s increased allocation, IWAI spent Rs 560 crore, bringing the total spend over 25 years to around Rs 1,500 crore.

Asked about why water transport has not moved forward despite many factors in its favour, IWAI vice-chairperson Jayshree Mukherjee says, “We are hoping with the example of NW 1, things will look up and more investors will come forward.” NTDPC, IWAI and logistics firm JITF Vector have signed an agreement to transport 330 mt of coal on NW 1 from Haldia to the Farakka plant. If the project is successful, NTPC and Jindal will look to expand the same to two more power plants — Barh and Kahalgaon in Bihar.

Officials at IWAI inject a note of caution. They say private investment will only come in if there is a guaranteed load to be carried. “An assurance of sorts is needed,” says Khare. Citing the example of Goa where barely 80 km of waterway is used to carry over 55 mt of iron ore, he says water is used wherever there is a promised load as it is the cheapest form of transport.

With the increasing interest of investors, officials and even tour operators, things are looking up. “We will be able to improve the waterway facilities to ensure private investment,” says Khare. He adds that in the 12th Plan, IWAI proposes to spend Rs 1,500 crore — around what it has managed to spend over 25 years. But, at present, waterways in India transport only 100,000 people and 4.5 mt of cargo annually. If projects in the pipeline materialise, investors come forward and the IWAI does not disappoint, India could boast of one of the largest and greenest transport networks in the world.