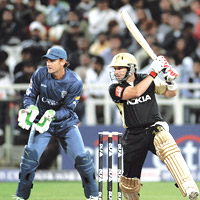 08 November, 2014
Print this article Font size -16+
The Enforcement Directorate (ED) on 23 May' 2013 registered a money laundering case in the IPL spot-fixing scandal to probe alleged routing of hawala funds and other financial irregularities which emerged after police investigations.
With the ED coming into picture by invoking the criminal clauses of the Prevention of Money Laundering Act (PMLA), the noose would tighten against the accused players and bookies as under the said Act the onus of proving one's innocence is on the accused and there was also the possibility of seizure of assets and bank accounts.
The agency registered the case after going through the FIR of the Delhi police filed in this regard which led to the arrest of three Rajasthan Royals players-- India pacer S Sreesanth, Ajit Chandila and Ankeet Chavan and a number of bookies.
The agency will soon go through the reports of various other police departments which have recently begun their probes in this regard after the Delhi police unearthed it last week with a slew of arrests.
The agency, according to sources, will also decide on recording the statements of players and bookies including some hawala dealers after initial investigations.
The ED is already scanning a number of hawala transactions and operatives active in the country.
It is also working to approach their counterparts in some middle-east countries to get "reliable" information on international syndicates working in the domain of match-fixing or spot-fixing.
Apart from the special units of Delhi and Mumbai police and a number of police departments in the country, the Income Tax department has also begun a probe in this regard.
I-T investigators will go through the tax returns and transactions of the people who are found to have been involved in spot-fixing to detect unreported income.
The ED is already probing alleged foreign exchange related violations in the earlier editions of the T20 Indian Premier League (IPL) cricket tournament and has issued penalty notices in many cases.
(PTI)
Tags assigned to this article:
business news 4 ipl media and entertainment enforcement directorate delhi police ipl 6 ipl innings 6 s sreesanth