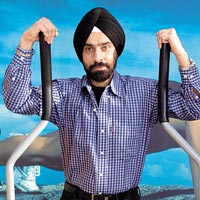 08 November, 2014
Print this article Font size -16+
Two former top executives of Reebok India, owned by German sportswear maker Adidas, have been arrested by police outside New Delhi after they were accused of fraud that led to the company losing 8.7 billion rupees.

Former India managing director Subhinder Singh Prem and former chief operating officer Vishnu Bhagat, along with three others, had been arrested, said police officials in Gurgaon, where Reebok India filed the complaint in May.

"They have been arrested. We are seeking their custody in court," said a police officer with the Economic Offences Wing of the Gurgaon police, which is carrying out the investigation.

He declined to be identified as he is not authorised to speak to the media. Phone calls to the Gurgaon police commissioner were not answered.

Last month Adidas said it did not expect any major change from the 70 million euros in restructuring charges it has already flagged as the cost of dealing with what it called commercial irregularities in India.

Adidas also said in August it expects a fresh start for Reebok India in 2013 and in May had indicated it would cut the number of Reebok stores in India by one-third.

The German company bought US rival Reebok in August 2005 for $3.8 billion but their Indian operations were merged only in 2011.

WHO Calls Emergency Meeting As Monkeypox Cases Cross 100 In Europe