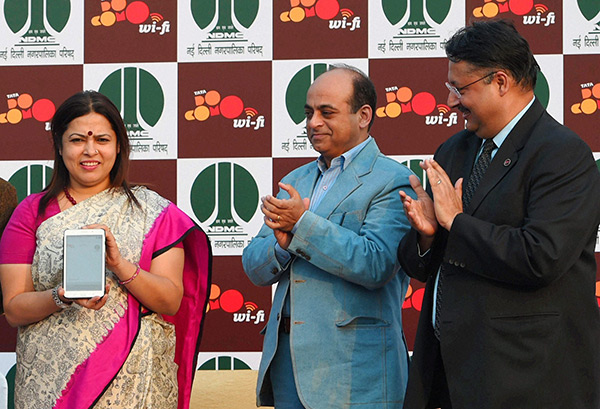 02 December, 2014
Print this article Font size -16+
The New Delhi Municipal Council (NDMC) has launched public Wi-Fi services in Connaught Place, the business hub of India's capital.
Chairperson Jalaj Shrivastava said NDMC is the first municipality in India to have a free public Wi-Fi zone.
The civic agency has partnered with Tata Teleservices to provide the service, which will cover the Inner and Outer Circles of one of the busiest parts of New Delhi.
Visitors can avail of the facility on their mobile phones and computers by filling in details such as e-mail ID and mobile numbers.
A one-time password will then be received to connect to the internet.
The service will be free of cost for the first 20 minutes and thereafter the user will have to do a recharge.
Recharge cards are available at Rs 10 for 30 minutes, Rs 20 for 60 minutes, and Rs 50 for 180 minutes of Wi-Fi access.
"This Wi-Fi service in Connaught Place will be the largest ever in India. At a time, the service can be availed by 5,000 people with the speed 512 kbps," according to a statement.
Tata Docomo already provides such facilities in other public areas including Terminal 3 of New Delhi's Indira Gandhi International Airport.
"The deployment of Wi-Fi services in one of the biggest public open-areas in the city is a nod to the emerging trends of data consumption, especially by millennial. For us at Tata Docomo, public Wi-Fi access is an important step towards digitisation in the city," Tata Teleservices MD N. Srinath said.
Earlier this year, Delhi's Khan Market became the first public space in the city to officially get Wi-Fi access, also powered by Tata Docomo.
NDMC plans to connect whole of the area under its jurisdiction with the Wi-Fi services and has already partnered with Reliance to undertake the project.
"Reliance has already been given 680 poles on a trial basis to test 4G connectivity. We are looking at mainly residential places where the residents can derive maximum benefit from this service," said O.P. Mishra, director of projects at NDMC.
The project will be completed by March 2015, he said.
Tags assigned to this article:
news 7 reliance wifi delhi tata docomo tata teleservices new delhi municipal council connaught place jalaj shrivastava n srinath