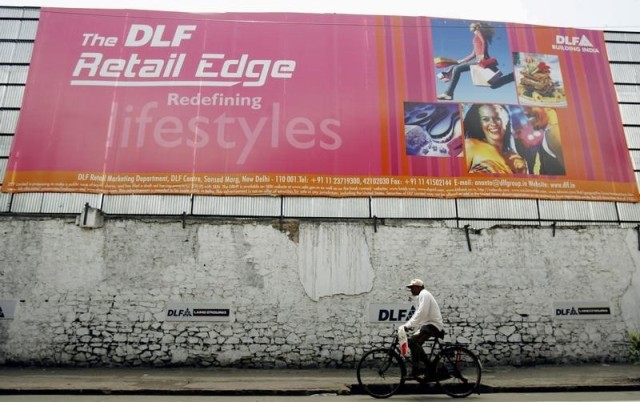 02 December, 2014
Print this article Font size -16+
India's largest real estate firm DLF Ltd, which has been shut out of capital markets for three years after a regulatory probe, reported a 9 per cent rise in profits in its second quarter, with sales edging higher.
DLF, burdened with $3 billion of debt, said late on Thursday that net profit for the July-Sept quarter was 1.1 billion Indian rupees ($17.89 million) versus 1 billion rupees a year ago. Sales rose 3 percent to 20.13 billion rupees.
Analysts on average expected the company to post a profit of 1.08 billion rupees.
The Delhi-based company is primarily engaged in development of housing, office and retail properties. It has a huge land bank with potential developable area of over 300 million sq feet, of which about 60 million sq feet is under construction.
In its harshest ever punishment, the Securities and Exchange Board of India (SEBI) on Oct. 13 barred DLF and some of its executives from capital markets, penalising them for failing to disclose key information at the time of the company's record-breaking 2007 market listing.
The indebted company received temporary relief after it was allowed to redeem its investment in mutual funds to meet its cash flow needs.
DLF's cash to short-term debt stood at 0.32 at the end of March, suggesting its cash is not sufficient to repay debt maturing within a year.
DLF did not provide a full cash flow statement or an update on its debt position in Thursday's brief statement.
(Agencies)
Tags assigned to this article:
news 7 real estate dlf financial results