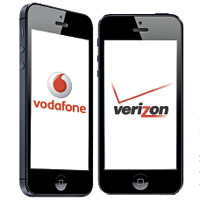 08 November, 2014
Print this article Font size -16+
Vodafone Group said it was in talks with Verizon Communications to sell its prized stake in Verizon Wireless, the No. 1 US mobile carrier, in what would be the third-biggest deal of all time. Verizon could pay $130 billion for 45 per cent of Vodafone’s stake, according to reports. Verizon has made no secret of its desire to gain full ownership of a network that is growing at a rapid rate and generating billions of dollars in free cash flow. But Vodafone’s CEO Vittorio Colao waited for the right moment to sell the stake in a deal that would leave the world’s second largest mobile operator with assets in Europe and emerging markets such as India, Turkey and Africa. Verizon is working with several banks to raise $10 billion from each to finance about $60 billion of the deal. The two firms also own a cross holding in Vodafone Italy, which may form part of the deal.

Under Fire
Around 40 per cent of the US’s highest paid CEOs over the past 20 years ended up being fired, paying fraud-related fines or settlements, or accepting government bailout money, according to an Institute for Policy Studies (IPS) study. It said CEOs of large firms received about 354 times as much pay as the average American worker in 2012. IPS looked at the 25 best-paid CEOs for each of the last 20 years — 241 in total. Of course, all the big financial services firms during the 2008 financial crisis received bailouts, but many, such as Lehman Brothers’ Dick Fuld, were at the helm when their firm either went under or accepted a rescue package.

Paying Up
Merrill Lynch has agreed to pay $160 million to settle a federal class action lawsuit brought by African-American brokers eight years ago, according to reports. The settlement, one of the largest in an employment discrimination case, would set up a pool of money to be divided among around 1,200 current and former brokers at the firm, according to one of the partners at Stowell & Friedman, the Chicago firm that brought the case in 2005. The federal district court is yet to approve the settlement. Previously, Coca-Cola had agreed to pay $192.5 million in a settlement in 2000; and Texaco agreed to a settlement valued at $176 million in 1996.

Break With History
Billions of dollars in US tax breaks prized by manufacturers, energy firms and other industries could be targeted for elimination when two powerful lawmakers introduce proposals to overhaul the US’s tax system. The plans may be introduced this month and face tough odds in the Congress. Democratic Senator Max Baucus, chairman of the Senate Finance Committee, and Republican Representative Dave Camp, head of the House Committee on Ways and Means, are considering trimming a slew of tax deductions and other breaks to offset the cost of cutting the top corporate and individual rates to as low as 25 per cent, say aides and others. The corporate rate now tops out at 35 per cent, while the highest individual rate is about 40 per cent.

The Bright Spark
The Philippines’ economy posted a robust expansion of 7.5 per cent in the second quarter, matching the pace of China as the other fastest growing economy in Asia. Strong fundamentals and domestic spending buttressed the country from the region’s fund outflows. The solid growth pace lifted the peso from nearly three-year lows and would help the Philippines keep its favoured status among investors amid more market volatility. The Philippines has overtaken emerging economies such as Indonesia as a safe investment bet due to prudent management of fiscal and monetary policy. It secured investment grade from ratings agencies this year.

It’s A Hit
Sony has a hit product on its hands. And Apple, Samsung Electronics and LG are all using it! Sony’s latest star performer isn’t a gadget, but a chip found in almost every high-end camera and smartphone — Apple’s iPhones 5 and 4S, Samsung’s Galaxy S4 and LG’s G2, say researchers. The firm that helped invent the CD has captured almost a third of the $7.6 billion market for low-power sensors that record crisp snapshots. Sony boosted its revenue from the chips by about 30 per cent last year. Rivals’ reliance on Sony components isn’t new, as the firm supplied semiconductor parts for music players to other manufacturers. About 80 per cent of the imaging sensors Sony produces are sold outside the firm, said a Sony spokesman.

Caution Advised
The Bank of Japan (BoJ) signalled that the government needed to proceed with a planned two-stage hike in sales tax as part of efforts to fix its tattered finances or face a severe market backlash. Yoshihisa Morimoto, a BoJ board member, reaffirmed the bank’s assessment that the Japanese economy was headed for a moderate recovery, but noted headwinds such as geo-political risks in West Asia and market volatility caused by an expected reduction in the US Federal Reserve’s monetary stimulus as soon as this month.
Blame Game
Greece should never have been allowed to join the euro, German Chancellor Angela Merkel said, as she tried to lay the blame for the euro zone’s debt crisis at the door of her political opponents. Campaigning for re-election, Germany’s centre-right leader said, “This crisis has been formed over many years through mistakes that were made when the euro was created.” At a campaign rally, Merkel insisted that “one should not have accepted Greece into the euro zone...Chancellor Schroeder accepted Greece and weakened the stability pact...Both were fundamentally wrong and are the reasons for our problems today.” After Greece adopted the euro in 2001, public spending and government borrowing soared. Since 2009, Greece has been kept on life support by bailouts worth €240 billion. Europe’s biggest economy, Germany, made the largest contribution to the bailout funds, but Merkel has been attacked in Greece and elsewhere for prescribing such a heavy dose of austerity.

Uneven Recovery
Lending to the euro zone’s private sector contracted further in July, dragging on the euro zone’s nascent economic recovery and keeping up pressure on the European Central Bank (ECB) to maintain its expansive monetary policy. Private sector loans shrank by 1.9 per cent since July 2012, recent ECB data showed. A breakdown of the data showed declines were generally steeper on the bloc’s struggling periphery, showing that the recovery was uneven. The ECB has tied its “forward guidance” on interest rates to the inflation outlook and monetary dynamics remaining subdued.