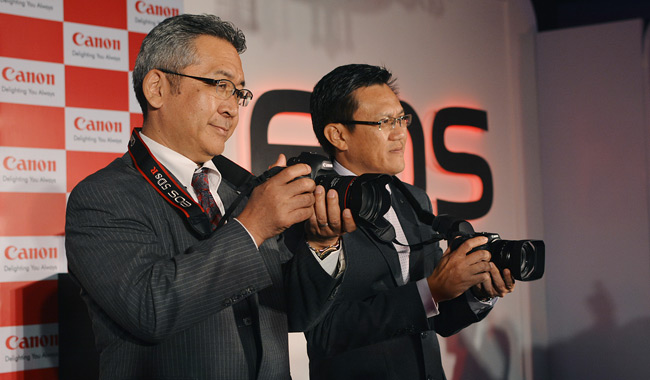 10 June, 2015
Print this article Font size -16+
The megapixel war just hit a new level as Canon announced two brand new DSLRs for the Indian market. The EOS 5DS and 5DSR are the latest offering and mark the 10th anniversary of the 5D range which was first announced in the year 2005.
Both of the cameras come with a high-end full frame sensor (36x24mm or a 35mm film) which is capable of capturing images of up to 50MP in resolution making it the World’s highest resolution full-frame DSLR. This also means that images can be blown up to a large extent without compromising on the quality. The only difference between the two is that Canon has used a low pass filter in the 5DS and two of them (to cancel the effect) in the 5DSR. A low pass filter is generally used in cameras to improve the sharpness and get finer details in your pictures. The 5DS is priced at Rs.2,52,995 and the 5DSR at Rs. 2,65,995 for body only.

A 50MP resolution might sound going overboard but Canon responded with the fact that these cameras are aimed at professionals in the field of commercial photography as well as fashion and landscape photography where requirement of such resolution is high. A Canon official also quoted “With the new 5DS and 5DSR range we are going closer to the medium-format range of cameras at a more affordable price.”
Along with the DSLRs, Canon also announced a professional 4K video camera called the XC10. This is essentially for videographers who want a simple and compact solution to make high quality videos as well as shoot stills as the XC10 offers the facility to shoot stills at 12MP resolution and 8MP while recording a video without hampering the quality. There is a 10x zoom lens onboard and the camera is as large as a high-end DSLR making it one of the smallest 4K camcorders in the market. The XC10 4K video camera has been priced at Rs. 1,70,000.
Tags assigned to this article:
more 4 gadgets canon kunal khullar eos 5ds 5dsr