Book On Sahara To Be Out In May 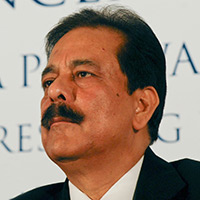 08 November, 2014
Print this article Font size -16+
Sahara: The Untold Story, a book promising to give us a never-before-peek into the world of Subrata Roy, the owner of the Sahara empire, will be released in May. This comes after Sahara reached a settlement with its author, Tamal Bandhopadhyay, Deputy Editor at Mint, and the book’s publishers, Jaico. The book will carry a disclaimer from Sahara, saying that it does not reflect the true and complete picture, and that it, ‘at best, can be treated as a perspective of the author with all its defamatory content insinuations and other objections, which prompted us to exercise our right to approach the court of law…’.
On the publisher's part, two offending paragraphs of 60 words or so out of a work of 70,000 words was removed. The paragraphs which referenced a so-called torture chamber as well as a starlet trying to break into Bollywood, described in the book as -- "incredible tales that cannot be substantiated"-- according to the author, were voluntarily removed because retaining these would have required disclosing the author’s sources to a court of law. “No way have I harmed or sanitised the work to arrive at the settlement,” said Bandhopadhyay.
The dispute between the parties dates back to December 2013, when Sahara filed a suit in the Calcutta High Court claiming that the book was defamatory in content, and obtained an ex-parte stay on its publication, while at the same time claiming Rs 200 crore in damages. The book, chronicles the rise of the Sahara Empire over the last 37 years, highlighting it’s clashes with the regulators, the Reserve Bank of India as well as the Securities and Exchange Board of India. Currently undergoing a jail term for Contempt of Court, Subrata Roy’s travails have been at it’s peak since the Supreme Court ordered it to disclose details of all it’s investors to whom it owed Rs 24,000 crore at that time.
The case dates back to 2007, when Sahara filed a for a public issue in two of it’s companies, when it came to the attention of Sebi that the group had been raising large amounts of cash from the public without taking an approval from the capital markets regulator. Sahara’s response at that time was that being an unlisted private company, it did not fall under Sebi’s jurisdiction, a claim which the Securities Appellate Tribunal and later the Supreme Court rejected.
Tags assigned to this article:
books bwbooks 7 subrata roy sahara the untold story tamal bandopadhyay