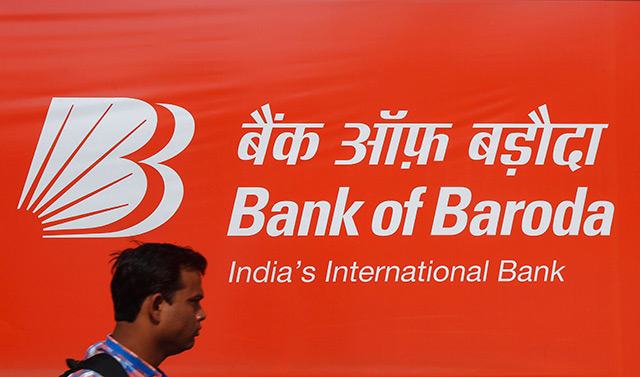 12 May, 2015
Print this article Font size -16+
Bank of Baroda reported on Monday a near-halving of its quarterly net profit, lagging estimates, as the nation's second-biggest state-owned lender was weighed down by higher provisions for bad loans.
The Mumbai-based bank said standalone net profit fell to 5.98 billion rupees ($93.76 million) for its fiscal fourth quarter to March 31, from 11.57 billion rupees reported a year earlier.
Analysts, on average, had expected a net profit of 9.58 billion rupees, according to data compiled by Thomson Reuters.
Provisions, including for bad loans, rose 58 percent in the March quarter from a year earlier.
The bank's gross bad loans as a percentage of total loans, however, was lower at 3.72 percent, compared with 3.85 percent in the previous quarter, sending its shares up as much as 13 percent after the earnings.
Bank of Baroda Chief Executive Ranjan Dhawan said the asset quality of the bank had improved more than expected, and that the bank's capital adequacy ratio, a measure of capital requirements, was very comfortable.
The Indian banking sector's bad loans problem, however, was unlikely to improve significantly in the next six months, he said, adding Bank of Baroda was not seeing major demand for credit from any sector other than commercial real estate.
Two straight years of weaker economic growth, stretched corporate balance sheets and stalled projects have led to Indian banks' bad loan ratio doubling in the past three years. State banks have amassed bad loans faster than private sector lenders.
The pain will likely continue for the next few quarters, bankers say, although additions to sour loans will slow this fiscal year that began in April as the pace of economic expansion picks up.
Increasing bad loan provisions put pressure on the state lenders which are relatively less capitalised compared with their private sector rivals to look for new capital.
The state banks have traditionally been funded by the government, but policymakers have in recent months said that they will be selective in infusing money into banks.
Bank of Baroda last fiscal year received a government capital infusion of 12.6 billion rupees. With the Basel III norms kicking in, Indian state banks need almost $38 billion in new capital through March 2019, the government has said.
(Reuters)
Tags assigned to this article:
news 3 banking bank of baroda bad loans basel iii financial results ranjan dhawan