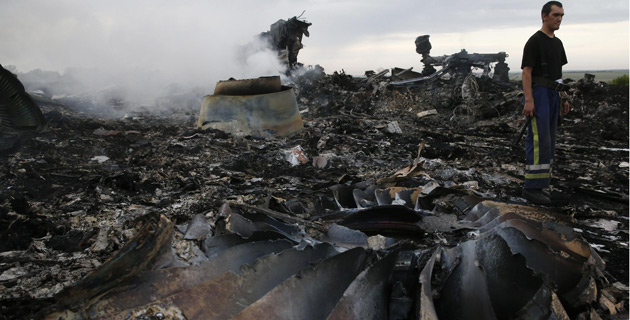 08 November, 2014
Print this article Font size -16+
Asian shares sagged and a drop in Treasury yields pressured the dollar on Friday after news of a downed Malaysian airlines jet at the Ukraine-Russia border sent investors scurrying into defensive assets.

In India, the Nifty falls 0.3 per cent, tracking weak Asian markets after news of a downed Malaysian airlines jet at the Ukraine-Russia border sent investors into defensive assets.

Among other large-caps, Larsen and Toubro Ltd falls 0.9 per cent, while Tata Power Co Ltd slips 2.3 per cent.

However, losses were capped because of sharp gains in technology stocks after Tata Consultancy Services, India's biggest software services exporter, posted a better-than-expected profit for the April-June quarter.

AI, Jet To Avoid Airspace
Indian carriers, Air India and Jet Airways, will avoid the airspace of war-torn eastern Ukraine following a directive issued to them by the DGCA in the wake of reported shooting down of a Malaysian airliner in which all 295 people on board were killed today.

The aviation regulator, Director General of Civil Aviation issued instructions to Air India and Jet Airways, the only two Indian carriers that fly to Europe and North America, to avoid Ukrainian airspace while flying to and from destinations in both the continents, official sources said here.

An Air India official said they would abide by any international advisory "to avoid airspace over conflict zone like Ukraine".

All 295 people on board a Malaysia Airlines plane were killed today after the aircraft was shot down over war-torn eastern Ukraine near the Russian border.

The Malaysia Airlines Boeing 777 was flying from Amsterdam to Kuala Lumpur carrying 280 passengers and 15 crew and could have been brought down by a ground-to-air missile.

MH17 Brought Down By Surface-to-air Missile: US
The United States believes a surface-to-air missile brought down the airliner flying from Amsterdam to the Malaysian capital of Kuala Lumpur, killing all 298 people onboard, an incident that has sharply heightened geopolitical risks.

Both Russia and Ukraine denied involvement in the crash, which came just a day after the US ratcheted up sanctions against Moscow.

MSCI's broadest index of Asia-Pacific shares outside Japan fell 0.3 per cent after touching a two-week low, but was still poised to eke out a modest weekly gain.

Japan's Nikkei stock average tumbled 1.1 percent but was also on track to mark a small rise for the week.

"Amid a recovery in the Japanese market led by the strong U.S. economy amid expectations for rising U.S. interest rates, this geopolitical concern can cloud such optimism in the mid-term," said Hiromitsu Kamata, head of Japanese equity target department at Amundi Japan.

Kamata said that the plane crash might be perceived as an isolated event for financial markets, but he also cautioned it had the potential to lead to bigger turmoil.

Even before news of the downed jet broke, market sentiment was already fragile after a weak reading on U.S. housing starts for June.

Wall Street had its worst day since April on Thursday with losses deepening in the last hour of trading, after Israeli Prime Minister Benjamin Netanyahu instructed the military to begin a ground offensive in Gaza.

Bond prices soared as investors sought safety, pressuring yields. The benchmark 10-year Treasury yield stood at 2.465 percent in Asia, down from Thursday's US close of 2.475 per cent and moving back toward a seven-week low of 2.441 percent marked on Thursday.

The dollar edged up 0.2 per cent to 101.32 yen, clawing back some of its nearly 0.5 percent slide overnight, which was its biggest one-day loss since early April. A break below 101.06 yen would take the greenback to a two-month low.

"Put simply, US Treasury yields declined on heightened geopolitical woes and hurt dollar/yen, which has a high correlation with yields," said Masafumi Yamamoto, market strategist at Praevidentia Strategy in Tokyo.

The euro, which has lost roughly 0.9 percent against the yen this week, traded at 137.05 yen after reaching a five-month low of 136.715 yen earlier in the session.

In commodities trading, U.S. crude oil extended gains by about 0.6 percent on the day to $103.85 a barrel, after jumping by more than $2 on Thursday. Russia pumps more than a tenth of the world's crude.

Gold also soared on safe-haven bids, though it steadied at $1,315.54 an ounce after gaining 1.5 percent in the previous session. However, it was still on track for a 1.6 percent loss for the week, breaking a six-week winning streak.