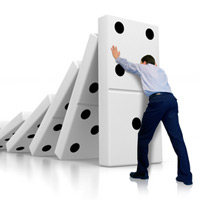 08 November, 2014
Print this article Font size -16+
Asia's services sector expanded in August despite a global economic downturn, business surveys showed on 5 September 2012, but optimism remained muted as regional economies toil to overcome the deepening impact of the festering euro zone crisis.
The HSBC services sector Purchasing Managers' Index (PMI) has remained above the 50-mark, which separates growth from contraction, in both China and India for months now, even as demand from Europe continues to wane.
Manufacturing PMI surveys earlier this week had painted a far gloomier picture, revealing a contraction in Asia's factory sector spread in August as new export orders fell across the region.
In China the services index stood at 52.0 in August, which, although a one-year low, showed the sector continued to grow. In India the sector expanded at its fastest pace in six months with the index at 55.0.
"Broadly speaking we still see Asia as quite resilient. Asia overall still benefits from quite strong fundamentals. It also has, in many cases, policy room to counter external headwinds," said Leif Eskesen, chief India and ASEAN economist at HSBC.
"In China's case this is something that will help prop up growth. More importantly domestic sources of growth are generally quite strong within the region."
Services PMI data for the euro zone, to be released later today, will likely suggest the region is headed for its second recession in three years, which would further hurt China, which counts Europe as its single biggest export market.
Firms in China hired more workers at higher wages in August, a sign that they expected conditions to improve in the future.
In India, the new business sub-index rose to a six-month high of 55.9 in August and optimism about future business remained high.
But confidence in the region was in short supply as overall the data from China was less upbeat.
The new business sub-index indicated the slowest rate of expansion since August 2011 and dragged down the main index, which does not bode well in an economy where services account for about 43 per cent of gross domestic product.
"As far as global economic headwinds (are concerned), we are not out of the woods yet. There are still significant downside risks to the outlook in Europe," said HSBC's Eskesen.
Gloomy Manufacturing Data
Data on Monday showed China's official purchasing managers' index fell below the crucial 50 level for the first time since November 2011, while a similar survey from HSBC showed activity shrinking at its fastest pace since March 2009.
In the euro zone, the manufacturing sector contracted faster than previously thought, with core countries failing to provide any support as the downturn swept across the 17-nation bloc.
With the crisis in the euro zone showing little signs of easing, hopes of a quick turnaround in China's fortunes are fast fading, with many forecasting its economy to remain weak well into the third quarter and possibly beyond.
The People's Bank of China cut interest rates in June and July and has been injecting cash into money markets to ease credit conditions, as calls for the central bank to do more to support the economy grow louder.
The services sector in Asia has been less affected by Europe's woes than export-focused manufacturing. As middle-class citizens in China and India are getting more prosperous, domestic demand continues to support both economies for now.
"I believe consumer spending is robust, but not that it would stay robust if there is a protracted industrial contraction," said Arthur Kroeber, managing director for of Dragonomics, adding that Chinese consumer spending is one of the least well-measured factors in the economy. "I am sceptical for the second half."
Any dramatic stimulus measures by Beijing are unlikely, as policymakers fears reigniting inflation in the property market and broader economy.
In India, signs of an improvement in the economy from the latest PMI surveys could further dash already receding expectations for more interest rate cuts from the Reserve Bank of India, which is now widely expected to leave them on hold this month as it focuses on stubbornly high inflation.
The RBI has said the onus now lies on the government to help the ailing economy, whose growth languished near its slowest pace in three years in the quarter that ended in June, even though analysts predict the worst might be over.
While the situation in Europe remains dire, survey data from Britain released on Tuesday provided some respite. The services sector in the UK posted unexpectedly strong PMI numbers, a sign the country is crawling out of recession.
Ireland's services sector grew for the first time in four months in August, a PMI survey showed on Wednesday, as a rise in new business at home and abroad helped shelter Ireland somewhat from a slump in the rest of the euro zone.
But more downbeat readings are expected from services PMI surveys due later from Italy, France, Germany and the euro zone as a whole.
That will leave investors anxious to see if the European Central Bank will adopt more drastic measures at its policy meeting on Thursday to help alleviate the crisis in the region and reduce crippling borrowing costs in Spain and Italy.