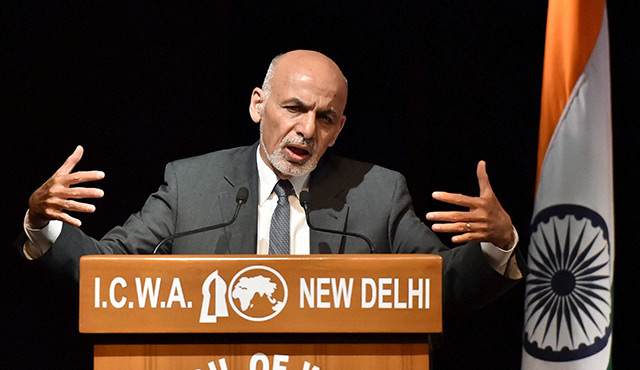 29 April, 2015
Print this article Font size -16+
Afghanistan's President Ashraf Ghani reassured India that his country's relationship with it was "foundational" in nature and Kabul will continue to have close partnership with New Delhi.
There has been some uneasiness in India over Ghani's Pakistan policy as he appeared to have taken a pro-Islamabad approach after becoming president last September.
"President Ashraf Ghani reiterated Afghanistan's perspective on the foundational nature of Afghanistan's ties with India, and the fact that India figured in four of the five 'circles' of Afghanistan's foreign policy priorities," noted a joint statement, issued after Ghani and Prime Minister Narendra Modi held talks.
Without naming Pakistan, the two leaders called on the international community to deal with the safe havens for terrorists that continue to threaten regional and global security.
India has offered assistance to Afghanistan in the defence sector to boost its fight against militant groups.
According to sources, New Delhi told the Afghan delegation that Afghanistan should "let their defence requirements be known" to India.
Ghani's predecessor Hamid Karzai was strongly pushing for supply of military hardware by India to enhance Afghan defence capability.
Delivering a lecture at the Indian Council of World Affairs, a government think-tank, Ghani said terror was becoming a "system" and the main challenge was a lack of coordination among countries to deal with it.
"In Afghanistan, we are today fighting on behalf of every one of our neighbours - from India to Russia. This fundamental challenge asks the state system to respond coherently together and organically."
Ghani said Afghanistan offered vast natural resources such as copper, iron ore and rare earth metals estimated at $1 trillion to $3 trillion that could be used for regional economic development.
Ghani said South Asia remained the world's economically least integrated region and there was a vast scope for regional cooperation.
He said people should consider a day when they could have a "breakfast in Delhi, lunch in Peshawar and dinner in Kabul".
Ghani, who has visited China and Pakistan before coming to India, appreciated India's contribution in reconstruction efforts in his country.
India has contributed $2.2 billion for various projects in Afghanistan.
Modi and Ghani reaffirmed their commitment to "patiently and systematically" work towards strengthening of the strategic partnership.
Trade, Connectivity
India and Afghanistan have agreed to sign within three months the Motor Vehicles Agreement to facilitate greater flow of people as well as goods, and the Mutual Legal Assistance Treaty in criminal matters.
Noting that India deeply values its friendship and goodwill with Afghanistan, Modi said the country stands with the people of Afghanistan as they build a united, stable, democratic and prosperous nation.
"This comes from the responsibility of our friendship. It also stems from our commitment to regional peace and progress.... And, it will not be limited to the period of transition or the decade of transformation. This is an enduring commitment," Modi added.
Modi said India should join an existing Afghan-Pakistan Trade and Transit agreement to allow goods to flow by land from Afghanistan to eastern India and back.
Developing a deep-water port in the Iranian city of Chabahar would give land-locked Afghanistan a route to the sea other than through Pakistan, Modi said.
"We believe that Afghanistan's direct surface link to India and the rest of South Asia, and increased connectivity to sea, could turn Afghanistan into a hub that connects Asia's diverse regions and beyond," Modi said.
(Agencies)
Tags assigned to this article:
news 3 trade pakistan narendra modi defence afghanistan chabahar chabahar port ashraf ghani