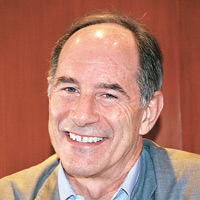 08 November, 2014
Print this article Font size -16+
Why this book and why now?
This is where I go back to my roots; I started out as a strategy person. Plus, I was motivated to writing such a book for the partnership with (A.G) Lafley. I felt it would be a great combo if a strategist and a CEO join hands to write a book on how strategy really works. Most people find strategy complicated, lacking fun and not interesting enough. I wanted to say you can make it simple and fun. The book is designed to make strategy more enjoyable, tractable, doable and, of course, more effective. There wasn't a book out there to help in this regard, even though there were a lot of books about important strategic concepts.

Do you think strategy is not taught enough in business schools?
It is taught in all business schools now, but these institutions give more importance to strategic concepts such as VRIO, a concept that is popular these days. But it does not tell you how you should create a strategy. All it tells you is, here's an idea you should keep in mind while you are doing a strategy. So, I would say, business schools do not teach you a course that helps you create strategy. It's a controversial thing to say, but it’s the truth.

You have said analytics thinking can be dangerous. Why?
Modern manifestation of strategy or business management is about getting more analytical. And that's been the case for the past 50 years, during which it got more analytical in reaction to two really important studies done in the 1950s by the Carnegie Foundation and the Ford Foundation. Two of the biggest foundations in the US, they studied business education at the same time and came up with findings in 1960 and said business education needed to be more analytical and rigorous. Since then, it has become ever more scientific, quantitative, mathematical and, naturally, complex. In a way, it was good. But as a 20th century pragmatist philosopher from America said, no new idea in the history of the world was proven analytically. So, the problem in being over analytical is all you can do is to analyse the past and you cannot prove anything new. To that extent, the business world remains ‘analytical-proof’ and that is stifling innovation. That's where I think over reliance on analysis becomes an issue.

Likewise, the more scientific you get, the more you will restrict yourself to analysing that which is analysable. Which should not be the case. For instance, can you be scientific about love? Are you going to measure the amount of love consumers have towards your brand using some galvanic skin response tool? I don’t think so. If you are trying to be over scientific about measuring the loyalty of consumers towards the company using such methods, all you could do is to measure those that are quantifiable and you will miss out on all the rest.

So are you negating the role of research as well?
Well, research is researching the past. The only thing you can research about is what is already existing or happening. You can ask people to speculate on the future; you can do concept tests when you ask people to speculate about the future, but those are notoriously unreliable. For example, a company can ask people, ‘would you like the following?’ and the customer would say, ‘sure, we would like the following' and still might not buy the product. So, inventing the future involves more than analysis or research; it involves intuition and a logical leap of the mind. The fact that you don't crunch numbers does not mean you are not applying logic to something. So I think, research and analysis is an aid to judgement; it never gives you the answer. That's why I say strategy is about shortening your odds. When you say this is the strategy for doing something in the future, the notion is that you can be perfect and be sure that it is going to work, it may sounds farfetched, but it does just that, if you think carefully about the logic and if you think you can dramatically shorten your odds.

So how big a role does intuition play in this process?
Very much. Intuition is, as I wrote in Design Of Business (2009), a logical leap of the mind. When you see something that does not obey a known law, you can’t apply inductive logic. You have seen hundreds of examples, and you have to try and figure it out. What you make is an inference and say this is what I think is going on; that is intuitive thinking. You can say ‘I think this is happening, but I cannot prove it happening, I cannot demonstrate it happening’. I think that's where great business ideas have come from.

You have had a long association with P&G. Tell us about a striking strategy move from the company.
I think it is their approach to innovation and development. Nobody in that industry had thought about such things the way P&G did.

Are Indian companies well-equipped with regard to strategy? Where do they need to change?
I think there is a mix of both. Look at the ICICI strategy, which I liked a lot. It’s about following the Indian diaspora around the world, as opposed to many banks preferred to do. I thought that was a great example of ‘Playing to Win’. But when I look at the Indian IT outsourcing companies, I see a greater challenge of growing up in a very quickly expanding world where you don’t have to make so many choices. So, they had massive cost advantage against the likes of Accenture and IBM Global Services. Now that is changing. The big players are breathing down their neck now playing the same game. Especially after the financial crisis when business slowed down, they are facing saturation. Now there is now the need for them to change strategy and do something like the ICICI did in banking. The whole idea is not about offering more upscale or high-value services; it is not a great strategy. It’s what everybody else is doing and that will not make you distinct. It’s an interesting time for strategy in that sector.

Could you give us a few examples of chief executives who have formed great strategies?
Obviously, the first to come to mind is Steve Jobs. I would also name Issy Sharp, founder and chairman of Four Seasons, who built up one of the finest hotel chains in the world. He is someone who followed the ‘Playing to Win’ strategy. He played narrowly in the luxury hotel market, and wanted to have a top hotel in all the market they played. He reinvented service and made it comfortable rather than being formal, which was a great strategy. Another example is A.G. Lafely, who co-wrote this book. He is a wonderful CEO, who did all sorts of unique things. The other finest strategist is Chrlse Koch. Everybody hates him in the US because he is a supporter of right wing causes. But he has grown during his life time a privately held company of $100 million to an $80 billion enterprise in sales because in business he has a very clear view of how to ‘play to win’.