Zack Snyder shares another glimpse of his 'Justice League' cut

Zack Snyder shares another glimpse of his 'Justice League' cut

Washington [US], August 21 (ANI): Ahead of DC FanDome online event, director Zack Snyder on Thursday (local time) shared yet another brief teaser of his widely anticipated cut of 'Justice League'.
The American director dropped a 20 seconds footage from his version of the superhero movie, which is all set to debut next year on HBO Max.
However, the new teaser doesn't give any revelation to the plot or the characters. The major look of the Snyder Cut of 'Justice League' will be shown at DCFanDome this Saturday. 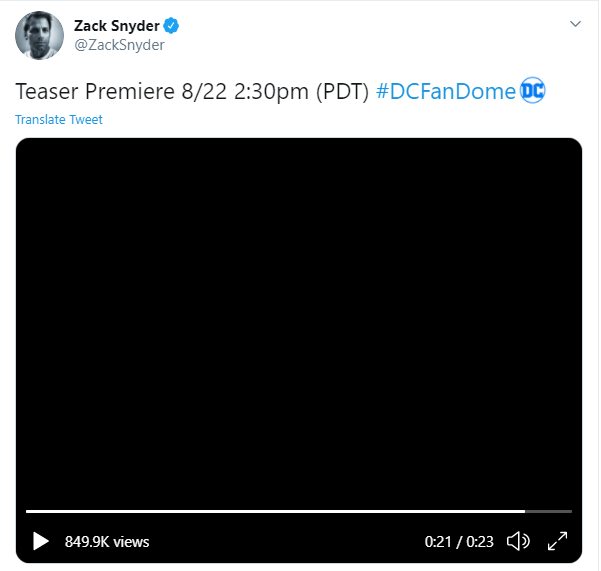 Earlier on June 18, the director shared the first teaser of his cut. The 34-second long video featured actor Gal Gadot superhero character 'Wonder Woman' discovering some sort of artefact.
While a voiceover is played behind, a dialogue: "The bell's already been rung, and they've heard it. Out in the dark among the stars. Ding dong. The god is dead."
The release of the mythical version of the 2017 superhero movie 'Justice League' was announced by the director himself earlier in May.
Fans have long surmised that there is a director's cut of the widely popular 'Justice League', which was finished by director Joss Whedon after Snyder departed during production, reported Entertainment Weekly.
The American director had completed the majority of work on the super-hero movie in 2016 but stepped away from post-production and editing in light of a family tragedy.
Warner Bros. brought in 'The Avengers' director Joss Whedon to step into Snyder's shoes for reshoots and tweaks.
The Warner Bros. flick opened to discouraging reviews and reportedly caused a loss of about USD 60 million to the studio, as it was one of the most expensive films ever made. (ANI)