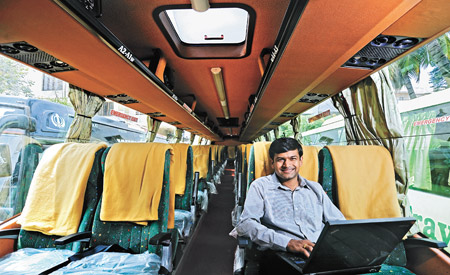 
The mentors asked the young team to focus on what operators wanted — increase in sales and track finances. Sama decided to create a bus operator ERP (enterprise resource planning) system and began work on it. Meanwhile, the team was meeting many operators to promote their website. "We virtually begged one operator to give us a chance by giving us his inventory of seats," says Sama. The operator reluctantly gave redBus two seats to sell on the Bangalore-Tirupati route. Simultaneously, all three put in their resignations to convert their hobby into a business.

The team decided to distribute pamphlets at IT SEZs and tech parks, as a majority of the workers were not from Bangalore and could use redBus.in. The break happened when a woman from IBM booked the first ticket in August 2006. "I delivered the ticket personally and also managed to earn myself a tip," says Sama. The rest, as they say, is history.

break-page-break
By December 2006, venture capitalists (VC) were flooding the gates of redBus.in, or rather the small studio apartment in Bangalore where the redBus team lived. The entrepreneurs were truly new to the game and had no clue how to build a business plan — initially they only asked for Rs 30 lakh to build the ERP system. "We were real amateurs and did not know how much money was needed to build a corporation," says Sama. With a little help from TIE mentors, the team got back with a plan that included the cost of the office, the service fees to be paid to lawyers and other charges. The first investment was Rs 3 crore by Seed Fund, and it helped redBus build an office, hire a sales team and improve their technology.

By 2008, redBus had Rs 50 lakh turnover through ticket sales and it continued investing in technology that could integrate the portal and the operators' IT infrastructure. Kanwal Rekhi of Inventus Capital invested Rs 5 crore and gave them an opportunity to build their bus operator software system (BOSS) and realise the dream of matching ticket economics. By 2010, Helion Ventures put in over Rs 1 crore. "These guys are pioneers in a huge, fragmented market and have aggregated inventory, which is hard to achieve in this space," says Ashish Gupta, managing director of Helion, who is also on the board of redBus.in. RedBus recently raised $6.5 million in Series-C funding. The funding was led by Helion along with Seedfund and Inventus.

On The Table
The bus industry is indeed highly fragmented. Nearly 65 per cent of the operators own less than 20 buses. However, the industry is growing and has huge potential. It is currently estimated to be a Rs 11,500-crore industry, growing at 35-40 per cent every year with nearly 220 million tickets sold per year.

The BOSS system launched in early 2010 helps bus operators work with many agents and cross-sell multiple inventories. "After being associated with redBus, agents need to pay upfront for inventory and this way we get our money on time," says Feroz Khan, owner of Omer Travels in Hyderabad.

To increase the business of operators further, Sama and team have created SeatSeller, a software that allows agents to choose their network of operators and inventory. Through this, agents deposit money against the inventory that they want to buy with redBus and make a commission on selling each seat. The commission is credited to redBus by the operator, and then transferred by it to the agents.

For every ticket purchased on redBus.in, the firm earns 40 per cent of the ticket cost as revenue. It also earns 5-10 per cent revenue from every transaction made on BOSS or SeatSeller. Then, there is a Rs 10 service charge for home delivery of tickets. Thanks to redBus.in, Sama is ensuring others don't miss a trip back home.