You Are Manipulating Courts: SC To Sahara 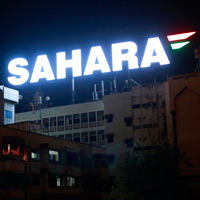 08 November, 2014
Print this article Font size -16+
The Sahara group and its promoter Subrata Roy faced a tough time on Monday, 22 April 2013, in the Supreme Court which pulled them up for not refunding Rs 24,000 crore to its investors and accused them of "manipulating courts" by approaching different forums for relief.

A bench comprising by Justices K S Radhakrishnan and J S Khehar slammed the group and its chief for not filing response on the Securities & Exchange Board of India's contempt plea against them and also issued notice to them on the market regulator's plea to detain Roy and the two male directors --- Ashok Roy Choudhary and Ravi Shankar Dubey ---to get investors' money back from them.

The bench, which at one time asked Roy's counsel to make statement that he will not leave the country or it will pass directions, however refrained from doing so and granted one week time to him and his two companies to file their response.

The bench also expressed its anguish when the Sebi informed that Sahara India has filed a petition in Allahabad High Court after the apex court had passed the order for attaching the properties of the group's two companies if they failed to deposit Rs 24000 with the market regulator.

"You are manipulating courts which is going on," the bench said when Sahara's counsel submitted that SEBI is attaching Roy's personal property despite he being not a party in the case in which apex court had passed the verdict on refunding Rs 24,000 crore.

"We are not interested in parties. If you have done this (moving HC) then it is a contempt of this court. Even approaching Sebi is contempt. It is very strange that you seek extention of time from SEBI after Supreme Court's order and you file appeal after appeal," the bench said, adding "You must remedy your mistakes instead of repeating the mistakes."

Senior Advocate Arvind Dattar, appearing for SEBI, however, contended that Roy was very much part of the order passed by the apex court which had also indicted Sahara India in its order on August 31, 2012.

He submitted that Sahara group and its two companies-- Sahara India Real Estate Corporation (SIREC) and Sahara Housing Investment Corporation (SHIC)-- have not followed the provision of Companies Act and details of investors given by them is vague.

"If they (Sahara) don't give the documents relating to investors then you (SEBI) can keep the money which will go to the government. They will have to give you the genuine information. You don't have to search for documents," the bench told Sebi's counsel.

Sebi urged the court to allow it to "take measures for arrest and detention in civil prison of Subrata Roy, Ashok Roy Choudhary and Ravi Shankar Dubey after giving reasonable opportunity of hearing."

Sebi also sought direction that their passports be deposited with the Supreme court.

Sahara group and Sebi are locked in legal dispute over the refunding of 24,000 crore by its two companies--SIREC and SHIC--to over three crore investors.

Earlier, the Supreme Court had dismissed its plea for more time to refund the amount.

SIREC and SHIC along Roy are facing contempt proceedings in the apex court which had on February 6 allowed Sebi to freeze accounts and seize properties of its two companies for defying court orders by not refunding the money to investors.

The regulator accuses Sahara of raising billions of dollars from small investors through an outlawed financial scheme and failing to comply with a court order to refund the money.

An unlisted conglomerate best known as the lead sponsor of the Indian cricket team and more recently as a buyer of overseas luxury hotels, Sahara argues it has repaid most investors.

It says its total liability is less than the Rs 5,120 crore it had deposited with the regulator as the first repayment installment following the top court's ruling that the bonds it issued were illegal.

The money it raised from small investors, many of them poor villagers who don't have bank accounts, was to be invested in real estate and other projects, according to regulatory filings. Sahara's other businesses include media and retail.