Worst Over For India, But Uncertainty Ahead 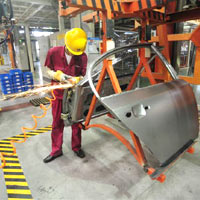 08 November, 2014
Print this article Font size -16+
The worst may be over for India's economy but uncertainty still lies ahead, and qualitative fiscal reforms are necessary to ward off any further bad news, chief of global rating agency Fitch's Indian arm has said.

"This is the bottom of the pit (for the Indian economy). Now whether we dig a further or deeper pit for ourselves by not implementing the fiscal reforms, or we find steps to climb up, that is where the uncertainty lies," India Ratings Managing Director and CEO Atul Joshi said.

"The worst is behind us, but there is uncertainty ahead of us, which if not handled properly would result in further bad news. If handled properly and executed well, then there is only good news ahead," Joshi said in an interview here.

Joshi, however, refused to comment on whether the risks still remain about a possible downgrade in India's sovereign credit rating to 'junk' status, or the prospects have improved for an upgrade.

"It would be inappropriate for me to comment on where it (rating for India) will go, as there is a separate sovereign team at Fitch Group to look at that aspect," he said.

India Ratings, which was formerly known as Fitch India, is a wholly-owned subsidiary of global rating agency major Fitch Group.

India's credit rating was put on a 'negative' outlook by various agencies including Fitch last year due to a slowdown in economic growth rate and lack of economic reforms.

A negative outlook means a potential downgrade from the current rating, which is the lowest investment grade rating 'BBB-' in case of India.

"Presently, Fitch has a BBB- rating for India with a negative outlook and the last what we said about it is that there is one in three chance of downgrade and that position remains as of now," Joshi said.

Another rating agency Standard & Poor's (S&P) has also put India on a negative outlook, but it recently said that the outlook could be revised to 'positive' if the government implements initiatives to reduce structural fiscal deficits, improves investment climate and increase growth prospects.

Besides, Moody's said in its recent India outlook report that the worst may be over for the Indian economy and the GDP growth rate could bounce back to 7 percent from 2014 onwards after bottoming out in the quarter ended December 31, 2012.

Asked about steps needed to be taken by the government, Joshi said: "What we need is qualitative fiscal reforms. Fiscal reforms by compression of expenditure could result in slowdown in short term, but if we are reducing the subsidies, for example by raising diesel prices, that would be positive."

"Whichever way it (upgrade or downgrade) happens, the action is not immediate," Joshi said when asked whether the chances are higher for a downgrade or for an upgrade.

Explaining the rationale behind the current rating and outlook for the economy, India Ratings' Chief Economist Devendra K Pant said: "When India was put on a negative outlook in June 2012, there was a virtual halt in reforms, the growth had slowed down and the economy had moved from a potential growth of 8.5 percent to a growth rate of near six percent."

Pant said: "So, there were no reforms, slowing down of growth and an absence of serious measures for fiscal consolidation. So, the situation till middle of September 2012 was very grim.

"Now, what we need to see is what has happened since then. With regard to the agricultural growth, a lot depends on weather and monsoon. In terms of investments, there have been some improvement on sequential basis, but it needs to be seen whether that would sustain and what level of industrial growth that would lead to."

With regard to the services sector, he said that this segment of economy has remained resilient for a long time, but the growth has been low here as well this year.

Pant said that there are initial indications that the overall GDP growth next year would be better than the current year and there is some improvement on that front.

"The improvement in growth rate to 6.1 percent next year from 5 percent this year is good, but what we need is a sustained economic recovery," Pant noted.

On reforms front, he said, there has been an overdose of economic reforms since September, including in two major and most contentious areas of retail FDI and diesel prices.

"But there are many others that are pending, such as insurance, land acquisition reforms. Besides, the question remains whether we would continue with fiscal consolidation and whether it would be through cutting down the subsidies or by lowering the plan expenditures," Pant said.