Washington [US], November 8 (ANI): World leaders from across the political spectrum congratulated Joe Biden who on Saturday became the President-elect of the United States, and Kamala Harris who made history as the first female to serve as the Vice President.
In a tweet, UK Prime Minister Boris Johnson extended his wishes to Biden and Harris for their historic achievement. "Congratulations to Joe Biden on his election as President of the United States and to Kamala Harris on her historic achievement. The US is our most important ally and I look forward to working closely together on our shared priorities, from climate change to trade and security," he said.
Former US President Barack Obama said Biden has got what it takes to become President and already carries himself that way.
"I could not be prouder to congratulate our President, Joe Biden and our First Lady, Jill Biden. I also couldn't be prouder to congratulate Kamala Harris and Doug Emhoff for Kamala's groundbreaking election as our next Vice President," said Obama.
In this election, under circumstances never experienced, Americans turned out in numbers never seen. And once every vote is counted, President-elect Biden and Vice-President-elect Harris will have won a historic and decisive victory, Obama stated.
"We are fortunate that Joe's got what it takes to be President and already carries himself that way. Because when he walks into the White House in January, he will face a series of extraordinary challenges no incoming President ever has - a raging pandemic, an unequal economy and justice system, a democracy at risk and a climate in peril," said Obama. "Our democracy needs all of us more than ever. And Michelle and I look forward to supporting our next President and First Lady however we can."
Hillary Clinton, the 2016 Democratic presidential candidate said, the voters have spoken, and they have chosen Biden and Harris to be the next US President and Vice President.
"It's a history-making ticket, a repudiation of Trump, and a new page for America. Thank you to everyone who helped make this happen. Onward, together," Clinton added.
Meanwhile, London Mayor Sadiq Khan took to Facebook, congratulating Biden and Harris on their well-deserved win.
"London looks forward to working with you -- it's time to get back to building bridges, not walls," he added.
Norwegian Prime Minister Erna Solberg stated, the US to be Norway's most important ally and we work closely together in many areas.
"On behalf of the Norwegian Government, I congratulate Joe Biden on his election victory. The US is Norway's most important ally and we work closely together in many areas. I look forward to developing our cooperation with the US under Mr Biden's and Kamala Harris leadership," Solberg wrote on Twitter.
Belgian Prime Minister Alexander de Croo took to Twitter writing, "Congratulations Joe Biden with your election as 46th President of the United States. A record number of people have cast their vote in this election. This illustrates the vibrancy of American political life and its democracy."
Other leaders including First Minister of Wales Mark Drakeford, Kyriakos Mitsotakis, Prime Minister of Greece and President of Zimbabwe Emmerson Mnangagwa extended their wishes. 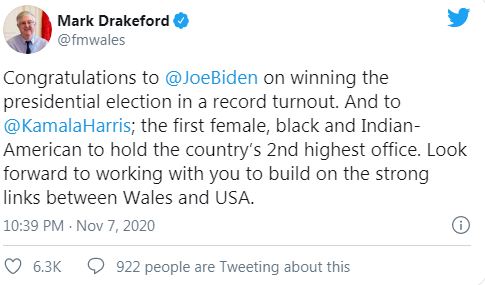 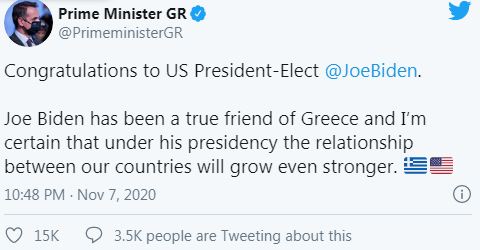 Canadian Prime Minister Justin Trudeau also extended his greetings saying, our two countries are close friends, partners, and allies.
"We share a relationship that's unique on the world stage. I am really looking forward to working together and building on that with you both," he added.
Nicola Sturgeon, first minister of Scotland congratulated Harris saying, "This is a big and special moment."
"The first woman in the White House - and the first woman of colour too. This is a big and special moment," Sturgeon tweeted.
"Congratulations to President-Elect Joe Biden and to history-making Vice President-Elect Kamala Harris," Sturgeon added.
Foreign Minister Heiko Maas said on Twitter: "Good that finally, we have some clear numbers. We look forward to working with the next US government. We want to invest in our cooperation for a new transatlantic beginning, a new deal."
From India, Prime Minister Narendra Modi also congratulated Biden saying: "Congratulation to Joe Biden on your spectacular victory! As the VP, your contribution to strengthening Indo-US relations was critical and invaluable. I look forward to working closely together once again to take India-US relations to greater heights."
"Heartiest congratulations Kamala Harris! Your success is pathbreaking, and a matter of immense pride not just for your chittis, but also for all Indian-Americans. I am confident that the vibrant India-US ties will get even stronger with your support and leadership," he added. (ANI)