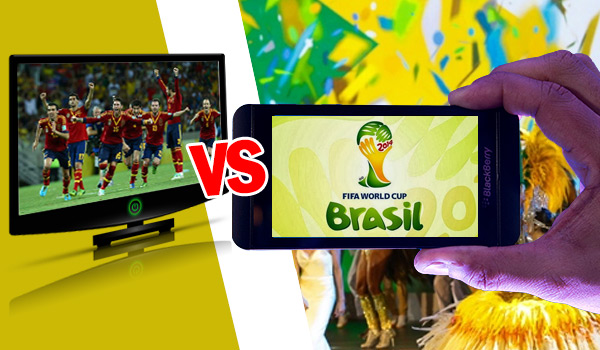 08 November, 2014
Print this article Font size -16+
It’s sleepless nights in India as the football fever rages. At 2.00 am, log into Twitter or FB and the TL is buzzing with match discussions. But even as the sports fans' eyes are on the game and on who scores how many goals, marketers are tuned towards the battle of the screens. Will the large TV screen hold off the threat being posed by the tiny mobile screen?  Even though football – a larger than life sport - is a big screen viewing experience, a recent Mobile Sports Report by Adobe reveals that watching sports online or on mobile devices is the primary driver of digital video consumption.

Even in India that's true.  nexGTv reports that users watched over 1.56 million hours of cricket on their mobile handsets during the recent IPL7. For advertisers this means rethinking campaign strategies and shifting media allocations to the mobile platform. "Brazil is in many ways the test case," revealed an advertiser during the Goafest.

But broadcasters are not taking chances. And making sure they have all the bases covered where the fan eyeballs and ad dollars can flow in. This is why Multi Screen Media which is telecasting the FIFA world cup on three of its channels -  Sony Six, Sony Six HD and Sony Aath (in Bengali)  - has just launched LIV Sports, a mobile and internet broadcaster that will show both live as well as video on demand match content. BW Online caught up with Nitesh Kripalani, Executive Vice-President – New Media, Business Development and Digital/Syndication at Sony Entertainment Network on the battle of the screens.

Will more Indians watch the World Cup on big screen (television) or on small screen (mobile)?
The World Cup Football is best watched LIVE and on a large screen, with friends and family. How to get it there on the large screen, is a different question. A lot of content is streamed on large screens either using a connected TV app, or via AirPlay or even via DLNA sharing/streaming. Set top boxes are Internet enabled and can stream content too.

“My time, My content and My Device” is where today’s consumer is moving. Today’s netizens stay connected all the time on their mobiles and tablets whenever and from wherever and they want their share of entertainment likewise. Consumers want to engage, interact and consume content at their terms, at their convenience and in their method.

The World Cup Football will be best enjoyed using the LIV Sports application with deep analytics, insights, instant re-plays all overlaid on the LIVE match video. The mobile app also has many engagements that will keep the Sports fans and the fence-sitters interested… you can either predict the score, click a selfie in your team jersey or play the LIV Sports Fantasy Football.

Which screen will win the battle of eyeballs for the FIFA World  Cup?
Mobile is the growth engine for Indian Internet users; we are already seeing 50 per cent of content consumption on the mobile.

With the launch of LIV Sports channel, how much traction you are expecting on both online and mobile app?
Our consumer studies, insights and analytics back every step that we take and we are confident about the traction we will receive from the LIV Sports website and application.

LIV Sports is the first and only digital destination to offer a unique mix of LIVE Sports, LIVE Statistics and Engagement, thereby catering to multiple user groups and their preferences. With LIV Sports we are aiming to create a new category of “Sport-ainment” or “Sports Entertainment”. You can either watch the LIVE match, with all the deep statistics overlaying the video, or you can just click a selfie in your team’s jersey using the Jerseyfy Me application. We have also brought back the digital avatar of the Player cards, combined with educating fans about the different athletes with - Pehchaan Kaun. The objective is to empower the Sports fan with deep statistics on video; as well as engage with the fence sitters. Over the next few months, viewers will be able to catch up with the widest range of sporting content, including Football, NBA, UFC, Tennis and Cricket on LIV Sports. The digital destination offers LIVE and exclusive video content along with a complete coverage of the latest sporting content present, across devices.

The top 3 genres of content consumption on digital are – Entertainment, Sports and News… with the launch of LIV Sports and the existing – Sony LIV, I think we cater to a fairly large segment of the market.

Your take on the change in behaviour of content consumption of Indian users from TV to digital medium?
I think both TV and the Digital medium will co-exist. In fact, the digital medium will help activate TV viewership and keep viewers engaged into the show, by giving fans – sneak previews, providing 2nd screen experiences… essentially giving a lot more data/information and creating a feedback mechanism from the viewer.

Talking about sports, as per the recent Mobile Sports Report released by Adobe, watching sports online or on mobile devices is the primary driver of the continued worldwide growth in digital video consumption.

Some key findings:
Another significant trend with regards to the paradigm shift that is witnessed in consumer’s video consumption behavior can be termed as “Cross–platform intake” or “platform agnostic” intake. For Eg, a typical consumer is present across multiple screens during any given time. He is watching a TV show, checking scores and highlights of his favourite match on his mobile, looking up for some information on the tablet or just sending an email – All during the same time. This is of supreme significance for content distributors to be available  on multiple touch points, at the same time. We need to be where the consumer is – be it mobile, TV, online or a tablet at the same time.
Tags assigned to this article:
web exclusives more 4 media and entertainment chitra narayanan fifa world cup sony entertainment sony liv sports nitesh kripalani