Working Out A Working Capital 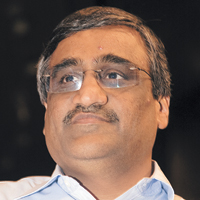 After declaring a net profit post minority interest of Rs 10 crore and a turnover of Rs 7,669 crore, Pantaloon Retail India (PRIL) may still find it hard to generate cash from its operations. PRIL has not generated any cash from operations for five years now. This could have certain implications. Although the company's operating profit margins are up 7 per cent this year, employee costs and interest costs could further erode Pantaloon's chances of generating cash. Employee cost has gone up by 30 per cent this year. According to analysts, the working capital cycle of Pantaloon is still under pressure because of the higher interest costs that it continues to incur in 2009. Its interest costs have gone up from Rs 200 crore to Rs 418 crore.

This is exactly the reason why Kishore Biyani, the promoter of Future Group, which owns PRIL, is looking for different forms of funding. "We have structured our balance sheet in such a way that we have created eight subsidiaries to raise money," said Biyani at the recently-concluded Retail Forum in Mumbai.

Analysts say Biyani is not delving into his own funds and is raising money through different routes, a fact corroborated by Biyani. Coincidentally, the company's reserves have gone up by Rs 200 crore this year. The promoters have also pledged 27.82 per cent of their shares and have raised additional equity of Rs 367 crore on a preferential basis. As Biyani put it, so long as Pantaloon had the working capital, raising funds was not a problem.