Will always be my most priceless possession: Anupam Kher shares picture with Robert De Niro

Will always be my most priceless possession: Anupam Kher shares picture with Robert De Niro

Mumbai (Maharashtra) [India], July 28 (ANI): Sharing a priceless moment captured with the legendary Hollywood legend Robert DeNiro, senior actor Anupam Kher on Tuesday showcased his most priceless possession -- a picture with the legend and penned the story behind it.
"Story of the pic: Story of this pic: There won't be a single actor in the world, aspiring or established, who won't be an ardent fan of this phenomenal legendary actor Robert De Niro," wrote the 65-year-old star in a post on Instagram as he shared the story behind the picture. In the picture, Kher is seen seated on a couch along with DeNiro, as they both shared a smile while pointing fingers at each other and looking at the camera. 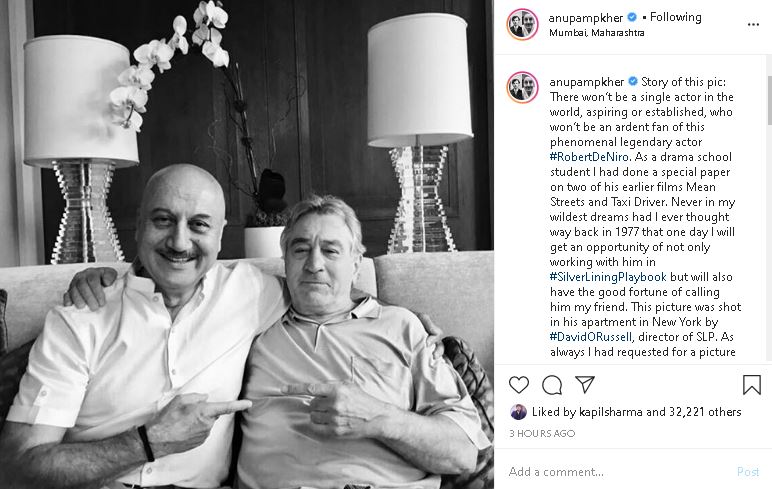 The 'Kuch Kuch Hota Hai' actor reminisced about his drama school days when had done a special paper on the 'Irishman' actor. He wrote, "As a drama school student I had done a special paper on two of his earlier films Mean Streets and Taxi Driver. Never in my wildest dreams had I ever thought way back in 1977 that one day I will get an opportunity of not only working with him in Silver Lining Playbook but will also have the good fortune of calling him, my friend."
Sharing the story of the picture that was captured by Hollywood film director David O Russell, Kher continues to add, "This picture was shot in his apartment in New York by David O Russell, director of SLP. As always, I had requested for a picture and as always, he was obliging. At that moment I thought it will be cool to point my finger in appreciation towards the legend in the picture."
The 'Hotel Mumbai' star noted how he got the picture and shared, "And then in almost slow motion I saw his hand going up and pointing his finger towards me in the similar manner. Miraculously David clicked the picture at that very moment."
As the 'Saaransh' actor penned his historical moment he added, "And I registered my name in the history with this pic. For me, this will always be my most priceless possession. Jai Ho." (along with smiling Face with heart-eyes and joining hands emoji).
Kher and De Niro share a bond as they have acted together in Bradley Cooper and Jennifer Lawrence starrer 'Silver Linings Playbook'. (ANI)