Will The Real Prime Minister Narendra Modi Please Stand Up? 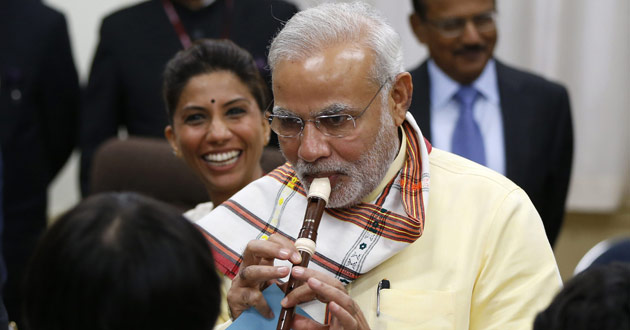 29 June, 2015
Print this article Font size -16+
Cornered over the Lalitgate scandal, Rajasthan Chief Minister Vasundhra Raje has recently been making much use of the old cliché — where there's a will, there's a way. Last Saturday, Raje attended a pre-scheduled meeting at the Niti Aayog, which Prime Minister Narendra Modi skipped, and flew back to Jaipur without meeting either the Prime Minister or BJP president Amit Shah. She left behind an impression that the Prime Minister and his party wanted to keep her at arm's length, despite not forcing her to resign over the Lalit Modi controversy. It was a well thought out strategy of the saffron party to shield Narendra Modi by averting any signal that Vasundhra Raje enjoyed his blessings, and to keep options open for the future.
Vasundhra Raje has a history of locking horns with the central leadership when attempts were made to clip her wings. In 2009, the Rajasthan unit of the BJP was plunged into crisis after Vasundhra Raje refused to step down on the directive of BJP chief Rajnath Singh in the wake of the party's debacle in the Lok Sabha elections in the state. The BJP's present line of thinking that the Rajasthan government has three-and-a-half years left and there is enough time for Vasundhara Raje and the party to cut their losses.
At this juncture, Narendra Modi's silence on the Lalitgate scandal that has been raging for days now has become one of the hottest talking points in town. Narendra Modi's words — Na Khaunga Na Khane Dunga (neither will I take bribe, nor will I allow anyone to take bribe) — have come to haunt him. The controversy puts the BJP, which promised good governance and probity in public life, in a very poor light at present. The best way out for Narendra Modi would have been to ask those facing corruption charges to step aside when an investigation is conducted. If exonerated, they could always be reinstated.
It was expected that Narendra Modi would touch on the subject during his radio programme, 'Mann Ki Baat" on Sunday morning, but the Prime Minister entirely dodged the murky issue, choosing to focus on the success of the International Yoga Day as well issues like rain water harvesting and insurance programmes for the poor.
"The Prime Minister's supporters claim that Narendra Modi is the quintessential 'outsider' who wants to break the Indian Premier League's stranglehold on power. This is why the revelations of the 'other' Modi are now a test case: if he is indeed the anti-establishment hero, then why is the prime minister conspicuously silent on the fallout of the Lalit leaks? Or, as a former Gujarat cricket association president (a post now held by his key aide Amit Shah), is he too a privileged member of the exclusive club?," Asks Rajdeep Sardesai in a comment piece in The Hindustan Times.
Narendra Modi's silence seemed especially incongruous in the aftermath of comments made by BJP patriarch Lal Krishna Advani, who said that there is a need to maintain probity in public life and recalled how he resigned soon after his name cropped up in the Hawala scam.
Quite a few commentators and media columnists are of the view that Narendra Modi will not buckle under pressure as it would set a wrong precedent of removal of ministers on the basis of charges. The removal of senior leaders in the wake of controversies will also adversely impact BJP's prospects in forthcoming Bihar Assembly elections.
In the past, Gujarat minister Babu Bokhariya, who stayed on in the then Modi government despite his conviction by a magistrate's court. A year later, he was acquitted by a higher court. When Amit Shah, was embroiled in criminal cases in Gujarat, Narendra Modi kept him on as home minister until the Central Bureau of Investigation charged Shah with kidnapping and murder.
The BJP feels that the Congress's tirade might not endure because it failed to garner enough support from other top Opposition leaders such as Mamata Banerjee, Lalu Prasad, Mulayam Singh Yadav, J Jayalalithaa and so on.
A lot of the pressure can be eased if the government steps up measures against Lalit Modi. But, the government seems curiously reluctant to act on the matter so far. Narendra Modi was elected by the people for being decisive and now he will have to take some tough decisions to uphold that image.
Tags assigned to this article:
prime minister narendra modi Lalitgate vasundhara raje scindia sushma swaraj Maan ki baat