Who Can Depend On Data? 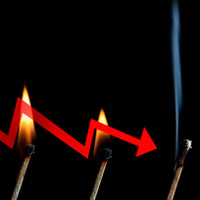 08 November, 2014
Print this article Font size -16+
Talking to media on 8 December 2011, the then commerce secretary Rahul Khullar had said "Every damn number for the last eight months has been revised...," conceding the crucial balance of trade deficit (at that point) was also kept under-valued at $107 billion instead of $117 billion. India's export figures had been accidentally inflated by more than $9 billion. There was not only mis-classifications but also "error in double counting and all sorts of things" due to problems in the computer software which was recently upgraded, he said.
Not only trade data, there has been hardly any important data, that has not been revised subsequently. India has sharply revised its GDP data to show a much worse economic performance than originally thought in the aftermath of the global financial crisis, putting renewed scrutiny on the reliability of government data. It is true that globally, economic data is revised on a regular basis. India revises inflation data every month. But the sharp revision - and the time gap from when the data was first collected - raised eyebrows.
The Central Statistics Office (CSO) has revised GDP growth to 3.5 per cent from earlier estimates of 5.9 per cent in the fourth quarter of 2008-09. On the flip side, it also showed the fourth quarter growth estimate for 2009-10 was better than first thought - 11.2 per cent rather than 9.4 per cent.

The news, first published in Mint newspaper, came as the country braced for the release of GDP data on 31 August for this fiscal year's June quarter, which is likely to show a continued economic slowdown and, by most estimates, should fall in line with the 5.3 per cent from the previous quarter.
Questions over the reliability of Indian data are not new. Economists have previously challenged the accuracy of other indicators such as industrial production and exports. Faulty data makes it potentially trickier for policymakers to take decisions on matters like interest rates.
Government statisticians defended the change in the GDP numbers as routine revision. "In GDP data, which is a very, very important data set for the central bank and the government, such sharp revisions are something which are a cause of worry," said RBS economist Gaurav Kapur in Mumbai. "Quality of statistics is something which has been a concern for a while, and these numbers point tothat again," he said. "At least for the inflation side, for instance, we know about revisions on a monthly basis, but in GDP numbers, having such sharp revisions, and that too going back three years, is something at least I have never seen."
True Picture
The downward revision means the economy is growing at its slowest rate in three years, not nine years as previously thought. Economists expect Friday's data to show the economy grew at 5.3 percent in the June
quarter, mirroring its disappointing performance in the previous quarter.
"These kind of historical revisions complicate the job for policymakers as it gets difficult to get an accurate picture of the risks in the economy and weakens ability to anticipate impact of shocks in the economy," said Rahul Bajoria, regional economist at Barclays Capital in Singapore.
India, which has basked in two decades of rapid economic development since landmark economic reforms in
1991, has seen growth slow sharply amid a prolonged political logjam that has stalled decision-making. Government officials said the revision reflected changes in how India's industrial production was measured. The government recently changed the base year to which data is compared, something it has typically done every 10 years. The government now plans to revise the base year every five years.
The new index covers 682 items and includes products such as clothing, jewellery, processed food and new industrial products that were not covered in the previous index. "The aim was to give a more true picture of the economy," T.C.A Anant, India's chief statistician, told Reuters.
The mandarains may be reassuring, but the analysts are not.
In his blog, economist Bibek Bebroy pointed out, "...It is not just GDP. There have been several goof-ups with data and numbers, IIP, exports. Is this just incompetence or is there a diabolical motive?  And if it is incompetence, why isn’t someone being taken to task? The surreptitious way in which the numbers have been revised suggests that something is being hidden."
Tags assigned to this article:
economy india news 8 cso exclusive to web gdp indian economy economic slowdown global financial crisis rbs trade ministry central statistics office inflation data