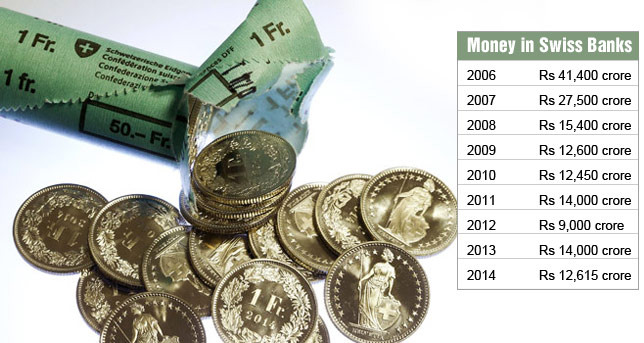 23 June, 2015
Print this article Font size -16+
India has moved down to 61st place in terms of foreigners' money in Swiss banks and it now accounts for a meagre 0.123 per cent of the total global wealth worth $1.6 trillion in Switzerland's banking system.
While not every penny lying in the Swiss Banks is black, a substantial amount of it is unaccounted for and falls in the category of black money. Does the latest ranking in Swiss money provide a reason to cheer? On the face of it, anybody would like to pat the NDA government for launching an attack on the black money.
The government has used a threatening language for people involved in the generation of black money and has brought the black money law to walk its talk on the issue. But one must be cautious before giving any credit to the government.
Rather, by the end of the story this story you would want to question the intent of the government in controlling the generation and spread of black money in the Indian economy.
Data collected by Global Financial Integrity between 2006 and 2014 suggests that Switzerland has ceased to be the favourite destination for Indians to save their black money.
Between 2006 and 2014, the amount of money parked in Swiss accounts has consistently come down, except for 2011.
The figures in the chart suggests that the rich Indians have got wary of investing in Swiss banks because the of the constant pressures from governments all over the world over Swiss authorities to curtail the parking of black money in its banking system.
So where is the money going?
In 2014, as much as three-fifths of India's total gold imports came from Switzerland, reflecting a significant jump in just a couple of years.
India imported 471.9 tonnes of gold from Switzerland in 2014, hinting that the Indians have been over invoicing their gold imports from Switzerland to bring back the black money as white money in the country.
In India, most of the jewellery transactions are in cash and tax is levied only on cash purchases of 500,000 rupees or more. This means most of these transactions remain unreported.
Bringing Back Money
A recent report by a real estate consultancy, CBRE revealed that in India as many as 1.2 crore newly constructed houses are lying vacant. Where is the money coming from to invest in these never to be sold properties? Of course it is the black money.
Other than gold and real estate, the traditional way of bringing back the money into the white economy is by way of foreign direct investment (FDI).
A look at the FDI inflows to India reveals that most of the companies investing in India rout their money from Mauritius to avoid tax through paper companies.
Between 2000 and 2015, Mauritius accounted for 35% of FDI inflows to India followed by Singapore at 12%. All other countries account for less than 10% in making foreign direct investment in India.
Mauritius is a tax heaven with no taxes for offshore companies and offshore bank accounts; the jurisdiction provides confidentiality and privacy for both individuals and corporations and has laws which allow flexibility.
So a large part of the FDI investment that has been coming to India, including the 40% growth registered in 2014-15 at Rs 1.76 lakh crore could be the black money.
Any government that wants to curtail the black money will have to deal with the challenge of attracting FDI in the Indian economy through fair channels. Till then governments can only bring in white papers and amnesty schemes to live up to the hype that they create around the issue of black money during elections.
Tags assigned to this article:
switzerland black money neeraj thakur banking fdi rich Indians mauritius singapore tax havens