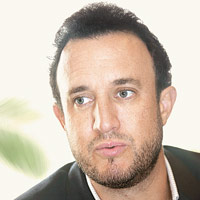 SMW was started in 2009 in New York by Toby Daniels, head of strategy firm Crowdcentric. This year, he came to Mumbai to promote the event. “There is an incredible shift that is happening at all levels in India — societal, business functions, governance,” said Daniels.

In 2010, SMW turned biannual and was simultaneously hosted in Toronto, Sao Paulo, London, Berlin, San Francisco and New York. Now it has come to Mumbai.

“Given the rise of mobile technology, and heightened levels of access to broadband, where more people are being connected globally, we felt that for SMW to be relevant, we needed to expand internationally,” Daniels said.

Spread across multiple venues, the event straddled marathons for breast cancer awareness, art and photo exhibitions, panel discussions on topics such as role of social media in politics, entrepreneurship and digital marketing, and musical soirees.

Credit for bringing the event to India goes to Hemant Soreng and Rohit Verma, founders of Bangalore-based
R Square Consulting, a marketing services firm, which presented what Daniels called “a great pitch”.

Brand Buzz
A Question Of Clout
Mobile app Klout, which assesses the online clout of Net users by employing social media analytics, has come up with a new application Cinch. This offering is a Q&A platform of sorts which pairs questions posed by users to answers from ‘Experts’ on the subject. Of course, only those with enough clout — determined by their Klout score — are deemed ‘Experts’. An interesting experiment to begin with, it remains to be seen how accurate it proves to be in solving queries. After all, clout and expertise are not exactly synonyms.

Dig The Data
Deep Bond
Some 29 per cent of US citizens say their phone is the first and last thing they look at every day, according to Qualcomm, manufacturer and marketer of  digital wireless telecom products and services.

The Mobile Push
Ninety per cent of mobile searches lead to action and 50 per cent lead to a purchase, according to Search Engine Land, a search engine marketing knowledge portal.

On The Go
People seem to make the most of their time while on the move. As much as 50 per cent of all local searches are conducted on mobiles, according to IT giant Microsoft.

Baijayant Jay Panda
[email protected]_Jay
Member of Parliament, BJD
Don’t know whether to laugh or cry. Is this what Kafkaesque means?! “@TOIIndiaNews: Ordinance to undo SC order not undemocratic: Congress”