We Are Focusing On Marketshare 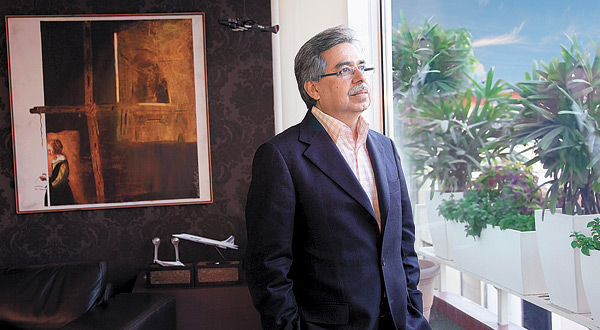 08 November, 2014
Print this article Font size -16+
The world’s largest motorcycle manufacturer by volume, Hero MotoCorp, may be under tremendous pressure from a resurgent Bajaj Auto and an aggressive Honda Motorcycle & Scooter India, but it has still grown 127 per cent in the past four years. Both rivals may be muscling in with higher marketshare at Hero’s expense (it lost 4 per cent in Q3), but it still sells more than twice the number of bikes sold by Honda and nearly one-and-a-half times those sold by Bajaj. But when the slowdown came calling, it coincided with a tough phase for Hero, which parted ways with its partner of 27 years Honda. Hero had to  create its own independent identity in the market. Hero MotoCorp MD and CEO Pawan Munjal tells BW he believes marketshare is more important than profitability — at least for the time being. Excerpts:

The slowdown coincided with your break-up and transition to the Hero brand. How did you cope with it?
During that period, almost all two-wheeler players had degrown, except for us. The industry declined by about 6 per cent. We didn’t grow, we didn’t degrow. But we went ahead with our investment in new capacities. And a huge amount of brand building. That was when we had our two-minute TV commercial in 2008-09, to stay top of the mind.

More importantly, for keeping customer interest alive, we didn’t hold back on new launches or variants. We kept up the momentum — 7-8 launches every year.

The other important stakeholders are our associates — the supply chain. The July-September period was a very difficult period for us. In September, on the 26th to be precise, though we are a cash-rich company, we were short by Rs 200 crore because our receivables had mounted. I said, let’s borrow for 10 days. It’s not the cost, it’s the goodwill that matters. Relationships are for the long term. And they (associates) will always remember that.
We have supported dealers.

Generally, we offer a 15-day credit, free of interest. We extended it to 20-25 days for some. Secondly, after 15 days, we start charging interest. In September, we waived the interest for July and August. As a company, it was a Rs 12-crore knock, but for a dealer, it was a large amount of money.

Recently, we increased dealer margins by Rs 100, effective October 2012. We have even arranged finance for dealers for 60-90 days, wherever they need to stock more. We consider our stakeholders a large family. So, it can’t be just lip service. You have to behave like a family.

How were you prepared for the slowdown?
When GDP starts coming down, certain sectors get impacted immediately — infrastructure, etc. Other sectors, such as auto, get impacted because of interest rates. Two-wheelers are more like consumer durables; they are the second-last to be hit. The last are consumer staples.

Another thing that was helpful was that our sales on credit was much lower than competition’s.

But margins have been hit, as we see in Q3 results. How badly have they been squeezed?
Our margins during that period were not that bad. Up to 2010-11, we had a joint venture. We separated in December 2010. There are certain costs which are inevitable — building your own R&D, brand migration, etc. There are costs on product development, manpower and initiatives for going global. These are one-time costs.

So, if margins have shrunk, we are not bothered because we are in it for the long haul. Margins had gone down to 10 per cent in 2006-07, but that was a conscious call because someone had started cutting prices.

Margins are at the bottom now. If the industry grows 8-10 per cent, we will be on track. This is a peculiar year (2012-13) — the industry has declined in the first six months and, for the full year, we don’t expect it to grow beyond 4.5 per cent.

How does Hero MotoCorp handle marketshare versus profitability?
We are right now focusing on marketshare, especially during the transition. We have been making investments (in new plants) to protect it. We came out much stronger because there is a limit up to which they (the competition) could cut prices. Our thinking is very clear. Let’s say today you lose 5 per cent marketshare. Tomorrow, you want to go from 45 to 50 per cent, you think others will allow you to grow? No. Margins are temporary. They could last two, three or six quarters. But if you start losing marketshare, it’s very difficult to get it back.

But is marketshare so critical that it starts hurting profits?
You have to trade off somewhere. You have to look for an opportunity to make that trade-off. But new players are coming into the market. Our erstwhile partner is also getting more aggressive. So, we thought, at the moment, we would focus on marketshare. We have faced this before. But we came out stronger. Our margins went up to 15-17 per cent, from 10 per cent.

We are depending on scale. But it’s also a phase of transition and we are working on quite a few new products by the end of the year. They will initially be refreshments and then, next fiscal onwards, we will have brand new products. Those who understand the industry can appreciate the time it takes from concept to launch.

The product development cycle was 2442 months. When we are saying that in calendar 2013 we will have new products, we are working for 24-30 months.

There has been a dent in your marketshare while both Honda and Bajaj have gained...
If you look at FY12, we have actually grown. Marketshare was at an all-time high when we went close to 57 per cent. A new global player will come with a product in a market where it didn’t have any. So, some turbulence was expected. The entire market shrank in the second quarter and we also decided to carry out a production correction. It’s a small blip of a quarter.

Do you have a platform-based strategy like car makers have?
It may not be to the same extent as in cars but there is a platform strategy in two-wheelers (also). We have a common platform on which different products will be introduced.

Do consumers settle for lower priced bikes in a slowdown?
To some extent, they do. It does not affect us much because they are our larger volume motorcycles anyway.

What is Hero’s strategy for the international market?
Our strategy is that over a 5-year period we want to get to a million units of motorcycles. That will constitute 10 per cent of our total volume of 10 million units. We are completely focused on Latin America and Africa, where we have already appointed quite a few distributors. We have started despatching bikes there as CBUs (completely built units). Over time, we will create assembly/manufacturing in some hubs, depending on tax structures, duties, etc.
The (Halol) manufacturing capacity we are setting up is meant to get us closer to ports so that more exports can be handled from the unit.

A curious choice of export markets — Guatemala, El Salvador, Honduras...
We did a very elaborate study of 154 countries. We shortlisted 30 to export to over the next 5 years. If you ask me, why didn’t we go to Brazil, that’s because we don’t have a product for Brazil. The idea was to tap low-hanging fruits; where our existing products can go as they are, or with minimum tweaking.

What is the product plan like?
Today, we are a 100-130 cc player. The plan is to get into other segments of motorcycles and scooters. We will obviously look at one of our manufacturing plants for different sizes of bikes.  Ultimately, we will get into performance bikes. To be one of the larger motorcycle brands around the globe, we need to be present in all segments. For the next five years, we want to be in volume sales of 10 million and revenues of $10 billion.

Looking at the macroeconomic environment, when do you expect higher growth?
To get back to earlier growth levels, one will have to wait. But clearly, two-wheelers are a long-term prospect. To my mind, there are alternative prospects. That is why we have invested in new capacities and in R&D. Since we are going out of the country to tap various markets, we are looking at fairly long-term prospects.