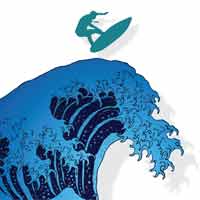 Slowdown is like climate change. It blows hot — and cold.

Slowdown is all of these, and a bit more. Because of its inherent uncertainties, a prolonged slowdown can be worse than a recession. Companies know precisely what to do when faced with a recession: slash costs, reduce workforce, cut spending. But in the midst of a slowdown, they are often caught on the horns of a dilemma: should they prepare for the worst, or for a turnaround? If they shun investments, they will be under-prepared for the recovery and lose marketshare. Equally, they will be left stranded with excess capacities if they invest heavily anticipating a turnaround and then the economy doesn’t improve. Business leaders spend sleepless nights agonising over this and their organisations are often engaged in a never-ending guessing game during a slowdown.

That’s why a slowdown tests the mettle of a leader. How should he lead? What does he communicate to his team? Does he advertise more, or cut down? Should workforce be retained or trimmed? Should fresh hiring be done or put on hold? Should he protect marketshare, or profitability? Should he retain debt, or retire it? Should he declare a dividend, or conserve reserves?

As if that’s not enough, JSW Steel chairman Sajjan Jindal believes that we have entered an era where Indian businesses will have to deal with slowdowns every two or three years as against five to seven years, or more, in the past.

For some of India’s best business leaders though, slowdowns are actually an opportunity to increase marketshare, acquire assets cheap, improve profitability and put a scanner on their operations. To understand how they take decisions during a slowdown, we decided to first identify the leaders who run companies that have shown exceptional growth even in this slowdown, which many feel is the worst that India has experienced in over a decade. We took the universe of companies in the Ace Equity corporate database to shortlist the Top 500 companies that reported a net profit in fiscal 2011-12, and had at least Rs 1,000 crore in revenues. From this, we churned the numbers to shortlist those that have grown at least 100 per cent in revenue between 2008-09 — the year the world was gripped by a recession — and 2011-12.

Obvious in their varied experiences are valuable leadership lessons for those who aspire to lead their organisations one day. For those already at the helm, some of these nuggets could inspire prompt mid-course correction. The one common thread that runs through this 100-per cent club is that its leaders didn’t wait for the slowdown to hit. Instead, they caught the bull by its horns.

TCS’s MD & CEO, N. Chandrasekaran, got down to micro-management of all vital statistics of the organisation on a day-to-day basis for at least a year, until the worst was over; JSW’s chairman and MD Sajjan Jindal decided to expand capacity to avail of cheaper equipment, contractors and labour; Pantaloon Retail’s MD Kishore Biyani restructured the organisation, sold stakes in subsidiaries and retired debt to make it a leaner organisation; Adi Godrej, chairman of Godrej Consumer Products, used negative working capital to make acquisitions overseas; HDFC Bank’s MD & CEO Aditya Puri expanded in the unexplored rural market; Harsh Mariwala, chairman of Marico, entered under-penetrated but high-growth segments such as breakfast cereals, deodorants, etc.; and, UltraTech and Idea Cellular chairman Kumar Mangalam Birla mandated his firms to go on a cash conservation drive, and moderate advertising, marketing and R&D spends.

These steps leave the organisations leaner, meaner and hungrier to exploit the uptick as and when the economy turns around. Though, that’s a big ‘if’. Lately, the government and its chief statistician have sparred in public over how slowly India is growing. While advance estimates of the Central Statistical Organisation (CSO) pegged India’s GDP growth in fiscal 2012-13 at a decade-low of 5 per cent, it implied the economy would grow at sub-5 per cent in the second half since the first half’s growth was 5.4 per cent. But finance minister P. Chidambaram and chief economic advisor Raghuram Rajan questioned CSO’s numbers, saying GDP would grow at no less than 5.5 per cent and that the ongoing turnaround in the economy did not reflect in the CSO numbers.

It won’t be long before we know who is right. But the Index of Industrial Production (IIP) numbers revealed in the week following the CSO-FM face-off inspire little confidence. Industrial output shrank 0.6 per cent in December 2012, while consumer price inflation rose 10.79 per cent in January 2013, prompting HSBC India chairperson and Ficci president Naina Lal Kidwai to project a dim view of a turnaround.

For every bit of optimism, there’s an equal and opposite dampener. For instance, one of the biggest counter-offensives against the slowdown has been that India’s consumption story has largely remained unaffected. But FMCG volume growth has halved in the past two quarters, durables are moving slower too, and the car industry is expected to degrow in fiscal 2012-13 for the first time in a decade.

So if we are in it for a long haul, why not dig in our heels and listen to those who fought the slowdown — and won? Hear it from them — direct and unadulterated...