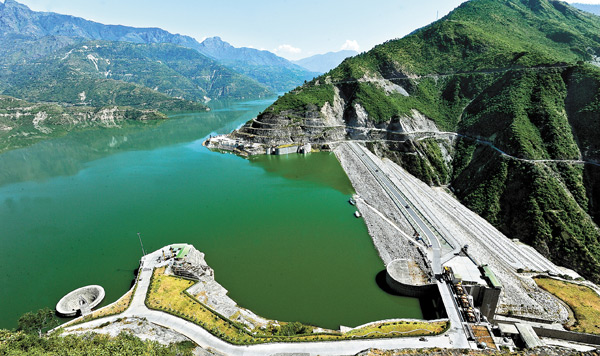 08 November, 2014
Print this article Font size -16+
A 120-km drive from Dehradun through the bumpy, hilly terrain of Uttarakhand is a picture postcard site. It is the confluence of the Bhagirathi and Bhilangana rivers in Tehri district; its waters are green as jade, flanked by green hills and blue skies. But right across the conflux is a sharp contrast. It is the 1,000 MW Tehri Dam, the first phase of the Tehri Hydro Power Complex. The other two phases include the 400-MW Koteshwar project and a 1,000-MW pump storage plant. The state government began constructing the dam in 1972, but scarcity of funds turned it into a joint venture with the Centre, with assistance from Russia (then USSR; 1,000 million roubles). The dam opened in 2006, but not before massive protests.
Environmental activist Sunderlal Bahuguna led the anti-Tehri agitation on grounds that the dam would endanger mountains and the livelihoods of the local people. Activists as well as many of the affected say rehabilitation was marred by corruption. The purpose of the project is also questioned. The dam, among other uses, is meant to supply 162 million gallons of water a day to 4 million people in Delhi and 108 million gallons to 3 million in UP. Locals are miffed. Tehri still faces power cuts up to 8.5 hours a day.
Tehri is now part of a larger debate on hydro power in Uttarakhand — ‘hydro as a panacea to power woes’ versus ‘hydro as a curse’. The state has an installed capacity of 3,165 MW — including state, central and private sector projects; it has the ambition to take this to over 12,000 MW from micro to large hydro projects. Of operational projects, the biggest is the 1,000-MW Tehri dam, owned by the Tehri Hydro Development Corporation.
The Hydro Math
Between 1 October and 9 October 2012, the state had a gross energy availability of 177 million units; the demand was at 211 million units. Load shedding was about 10 million units. In all, it overdrew about 15 million units. In 2011-12, the energy deficit was about 3 per cent; peak deficit was 0.7 per cent. This is expected to rise to over 24 per cent and 5 per cent, respectively, in 2012-13. Uttarakhand — like Himachal Pradesh, Jammu & Kashmir and Arunachal Pradesh — is a hydro-rich state; its potential is estimated at about 25,000 MW.
Hydro power makes up 19 per cent of India’s energy portfolio; second after thermal (67 per cent). Hydro generation is about 39,291 MW (our installed capacity and generation share is among the top 10 countries). The estimated potential at 60 per cent plant load factor (PLF) is 84,000 MW.
Avdhash Kaushal, a 76-year-old activist with over 40 years in social work, steers the pro-hydro movement. He even fought and won against uncontrolled limestone mining in Uttar Pradesh in 1988. His NGO — Rural Litigation and Entitlement Kendra — looks into the rights and development of tribals. In June, he led a group of impassioned women from villages in Mori district to Delhi to sensitise the press and policymakers of their ‘powerless’ plight. The only light, as demonstrated, was with flints. But they have mobile phones and refrigerators — gifts from politicians who promise power before polls, only to renege each time. To charge phones, they have to travel to neighbouring Himachal Pradesh. They have given up their lands for building hydro projects only to find progress stalled.
Kaushal’s logic is that Uttarakhand was created for development of the hills. With abundant hydro power resources, there is no reason why 1,220 villages should remain un-electrified, why industries should suffer losses of Rs 70-80 crore a day due to power cuts. “Each year, the state spends Rs 750 crore to buy 150 MW of power, but it is not enough to meet the needs.”
Interestingly, the Uttarakhand Jal Vidyut Nigam (UJNVL) fully owns only the 304-MW Maneri Bhali Phase II. It gets 12 per cent free power from other projects and buys the rest. “The free energy from Vishnuprayag and the share from central stations in 2011-12 have been about 240 MU and 4,130 MU. Power purchased during 2011-12 was around 1,051 MU at an average rate of Rs 4.41 a unit,” says B.C.K. Mishra, director of operations at UJNVL. The total power purchased by the state in 2011-12 (via open tender) was for about Rs 465 crore.
However, the plans have hit rough weather. And it has little to do with science or people. Enter 80-year-old Swami Gyanswaroop Sanand — formerly G.D. Agarwal, an alumnus of IIT (Rourkee) and University of California, Berkeley. He aims to stop projects that interfere with the flow of the Ganges. His ‘Save Ganga’ mission began in June 2008; he became a sanyasi in July 2011; Eventually, his fast-unto-death broke the state and central governments’ resolve.
break-page-break
Three projects, the 380-MW Bhairon Ghati, 480-MW Pala Maneri and 600-MW Lohari Nagpala, on the Bhagirathi were shut down; others on the Alaknanda and Bhagirathi hang on a balance. The final decision on Lohari Nagpala was taken in 2010 by a panel led by Pranab Mukherjee, then finance minister. Jairam Ramesh, a panel member, was quoted as saying the decision was taken “out of respect for sentiments of faith and culture as well as technical questions raised about the impact of the dams”.
Gently Down The Stream
Uttarakhand has over 100 projects on the Ganga and tributaries: 42 projects including the 2,400-MW Tehri complex in the Bhagirathi valley; 33 projects in the Alaknanda Basin. Most are run-of-the-river projects — using the river’s flow to generate power.
Proponents say that such projects — like the 90-MW Tiloth and 304-MW Maneri Bhali Phase II — do not alter the river’s course or water level. Water pumped from the Phase I dam through a 15-km stretch of tunnels inside mountains is used to generate electricity in Tiloth power house. The water then runs into the Phase II reservoir, then to Tehri and so on. The engineers conducting the tour insist every gallon used is pumped back out. But the view outside Phase II dam shows the stretch of river outside the dam is visibly lesser than what comes into it.

Activists refute the claims of the pro-hydro lobby. Vimal Bhai of Matu Jan Sangathan is one. Sitting in his apartment in east Delhi, the Gandhian laments the politics behind hydro projects. He feels it is a means of corruption; exploits people and the nature. Even a 2012 report by the Wildlife Institute of India for the environment ministry says such projects are “a major threat” to the fish stock in the Ganges (‘Assessment of Cumulative Impacts of Hydro-electric Projects on Aquatic and Terrestrial Biodiversity in Alaknanda and Bhagirathi Basins in Uttarakhand’).
Not everyone is in agreement though. “Such misleading reports may further strengthen vested interest of certain agencies... in stalling the hydro power development of the state,” wrote Nagendra Prasad Todaria and Sabyasachi Dasgupta, professors at Hemwati Nandan Bahuguna Garhwal University, in a letter to the Prime Minister. The engineers, however, do admit the impact on marine life. “It comes down to what is more important, power or environment. The cost to protect both is expensive,” says one.
This blame game is common. Each side claims the other is, say, working under foreign funding. Neither has proof; both are quick to deny wrongdoings. Truth is, hydro as a source of clean power is still debated. It displaces people; affects livelihoods. Tunnels need to be built inside mountains; lands are submerged. Rehabilitation is a headache. Shailendra Bhatt, a Tehri resident, says he got only Rs 20,000 for his 1,000 sq. mt land in Chham. He spent Rs 3.5-4 lakh for the new 200 sq. mt shop-cum-residence. Former Chham resident, Pooran Rana says his family was moved to Patri, Haridwar, to live in dormitories built by the government. Basic facilities were missing; the community is now building a school for themselves. Rana spent his own money to build home on land his father owned in the same area.
Is there an alternative for Uttarakhand? “We have tried to get a coal block allotted to us,” says former chief minister of Uttarakhand B.C. Khanduri. But in vain. Pollution levels also dissuade. Khanduri in December 2011 inaugurated the Kashipur gas project. The Haridwar gas-based plant is the second; GAIL and UJVNL signed an MoU in June 2011. But gas availability has played foul.
As far as renewables go, Mishra says UJVNL plans to add 250 MW of solar power through panels mounted on canals; like Gujarat did in Narmada. Khanduri says, “Tehri dam is too big and not commercially viable,” adding that projects under 25 MW (said to be more eco- friendly) are rational. Uttarakhand has 118 MW under evaluation and 53 MW under construction. The aggregated capacity for small hydro projects in the state is 1,400 MW.
Solar and small hydro projects can, however, only play a complementary role. Private enterprises are not keen on small hydro projects; the returns are small. These can fall prey to floods too. Three such projects in the Assi Ganga valley were washed away during flash floods in August. Incidentally, locals blame dams for the destruction. A hotel owner in Uttarkashi says shoddy construction work and poor waste disposal worsened flood and landslides. The discontent is echoed by some in Dehradun; hydro power is destroying the state. The terrain near the Maneri Bhali I and II projects still bear the scars. The projects were also hit. Rana says generators gave up under the assault and they could not open dams and release the water. Locals bought diesel to help start the projects’ generators.
But Uttarakhand has few options. Sushil Kumar Rastogi, a former general manager with UJVNL, is a votary of hydro. He, though, admits to imperfections. Both he and Khanduri concur that overuse of river water is a major concern. “Private companies want minimum cost for maximum gains,” explains Rastogi. “The problem is not with hydro. It is with implementation. You must have an agency to monitor projects.” Right now, Uttarakhand is stuck in a socio-economic, politico-religious Catch-22; and the river does not flow as usual.
yashodhara(dot)dasgupta(at)abp(dot)in
(This story was published in Businessworld Issue Dated 12-11-2012)
Tags assigned to this article:
magazine power iit water yashodhara dasgupta electricity hydroelectricity bivash banerjee magazine 12 november 2012 uttarakhand tehri ujvnl iit roorkee