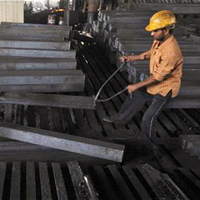 08 November, 2014
Print this article Font size -16+
Asian steelmakers have begun cutting exports in the face of growing cross-border trade disputes, raising the prospect that they may be forced to curtail production as they grapple with weak domestic demand and overcapacity.
The protectionist steps taken by steel-importing countries could hit steelmakers from major exporters Japan and South Korea. But China, which produces nearly half the world's steel, may only be pushed to curb output if domestic demand shrinks.
From the US to Indonesia, countries are trying to stem the flood of imports by slapping anti-dumping duties and confronting companies deemed to be taking business away from local producers.
Last week, a group of US steel pipe makers led by US Steel Corp, launched one of the biggest steel trade cases in years, asking the US International Trade Commission to stop what it claimed is a deluge of unfairly traded steel products from nine countries.
Japan, the world's No. 2 steel producer, exporting nearly 40 per cent of its output, is worried the situation may erupt into a trade war, and is among major producers taking steps.
"We are refraining from exporting certain products and to certain areas due to concerns over trade conflicts," said Jun Kadota, general manager at the main steel unit of JFE Holdings Inc, the second-biggest steelmaker in Japan and No.9 in the world.
JFE has stopped exporting flat-rolled magnetic steel sheets and strip to China, for example, he said.
Indonesia too has slapped anti-dumping duties on cold-rolled coils and sheets from Japan. While Tokyo was not named in the latest US steel case, American producers argue a weaker yen currency amounts to an unfair advantage.
"Should other countries accelerate steel exports to areas where there is strong demand, it may spark off a trade war and I am afraid that Japan will get caught up because we are an exporter," said Ryuichi Yamashita, director at Japan's Ministry of Economy, Trade and Industry. "Nationalism is increasing and we are seriously concerned about the trade issue," he said.
Trade disputes tend to rise when producers are confronted by weak demand at home and those losing money try to find ways to return to profitability, said Kaye Ayub, senior market analyst at British steel consultancy MEPS.
"Mills are likely to cut output, or carry out maintenance stoppages, in the second half of 2013 to tackle trade disputes," said Ayub.
Overcapacity
The global steel market has excess capacity of around 334 million tonnes, of which around 200 million tonnes is in China, according to investment bank Morgan Stanley.
That glut is pressuring steel prices with global demand only forecast to grow by 2.9 per cent this year, and by a similarly slow 3.2 per cent in 2014, based on estimates by the World Steel Association.
Despite slower demand growth, Chinese crude steel production remains near a record of about 2.2 million tonnes a day as the country's producers fight for market share.
Exports account for less than 10 per cent of China's total crude steel output which last year stood at a record 716.5 million tonnes. But they continue to grow, with Chinese exports of steel products rising 14 per cent to nearly 56 million tonnes in 2012, trumping Japan's 42 million tonnes.
"It seems the trade disputes don't really have much impact on China's export volume. Chinese steel exports have been at relatively stable levels since the global financial crisis and improved in recent years," said Bill Chen, a senior trader with Smart Timing Steel, a Hong Kong-based exporter that traded around 500,000 tonnes of steel last year.
"But with the slow recovery in the global economy and fiercer competition, Chinese steel mills and traders are facing falling profits. However, I don't see any fall in exports would really help cut China's steel production or force any consolidation."
Other countries named in the US case, such as India, Vietnam and South Korea, said they were watching what happened with the probe.
"If they lose the case, for sure Vietnamese companies will face more difficulties in exporting steel overseas, especially to the US," said Dinh Huy Tam, general secretary of Vietnam Steel Association.
(Reuters)
Tags assigned to this article:
news 8 metals and minerals crude steel steelmakers trade war steel imports magnetic steel sheets dumping us steel