Washington [US], February 5 (ANI): After increasing the audience's frenzy about the announcement of the release date on the much-awaited film 'Tom and Jerry', the makers of the flick, Warner Bros. finally revealed that the movie will hit cinemas later this month on February 19.
The Twitter handle for Warner Bros. India unveiled the big announcement of the release date and tweeted, "Your favorite Childhood cartoon is now a major commotion movie. How excited are you for Tom and Jerry Movie? #TomandJerryMovie releasing in Cinemas on February 19 in English, Hindi, Tamil, and Telugu." 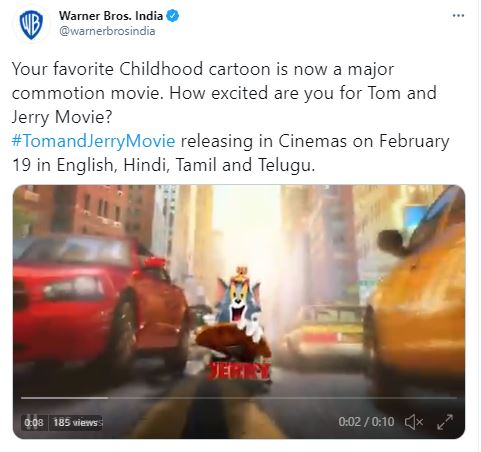 Along with the announcement, the makers also shared a motion poster of the film featuring the titular characters that are animated in similar styles to the original television show. The film diverges from tradition with live actors and a real-world setting.
As per an earlier report by Variety, the film sees Chloe Grace Moretz starring as an event planner hired by a hotel to organise a wedding function, but she is also expected to get rid of a mouse - Jerry - from his recent residence which is within the building's walls.
The new film has been written by Kevin Costello and is based on Joseph Barbera and William Hanna's classic 'Tom and Jerry.'
The film revives the decades-old rivalry as Tom is enlisted to help remove Jerry from the premises before the date of the wedding arrives, reported Variety.
'Tom and Jerry,' film become the latest of the 'Tom and Jerry,' projects with the first shots dating back to 1940. There are 164 animated shorts, several TV series, and many movies to the 'Tom and Jerry' name. (ANI)