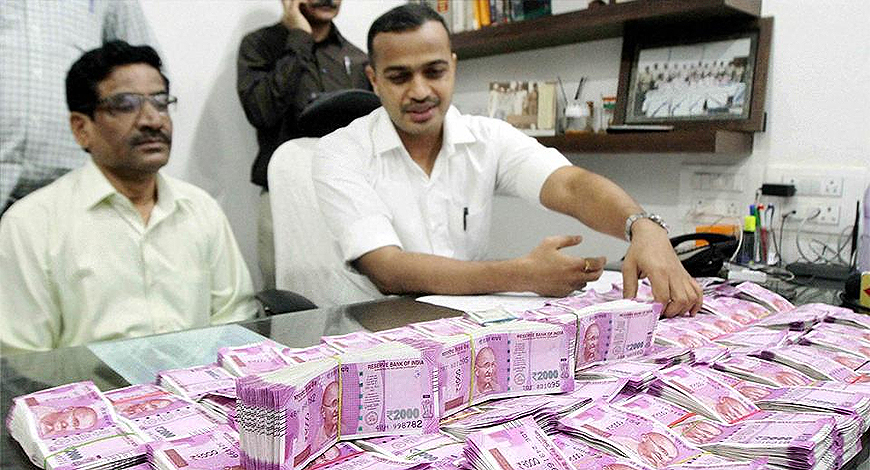 The Enforcement Directorate (ED) has conducted country-wide searches at 110 locations as part of its major crackdown on 500 shell companies suspected to be generating huge amounts of black money.

The raid operations across 16 states began early morning with the ED sleuths swooping down at market places, business centres, residential premises and even houses put up on rent to hunt down the allegedly dubious and suspicious firms which the agency believes are the "backbone" of black money in the country.

In one instance, the agency found Rs 20 crore deposited in a bank account of a dubious operator which will be "considered for attachment".

The agency said it searched a Mumbai-based operator who ran 700 shell companies with 20 dummy directors and had "converted Rs 46.7 crore for Chaggan Bhujbal", the jailed ex-Maharashtra Deputy Chief Minister.

The central probe agency, which has a total strength of about 800 officers and staff at its various regional and zonal offices in the country, was virtually out on the field to undertake one of the biggest operations in the country against shell firms. The drive was part of a recent PMO directive to check the illegal operations of these companies.

"The operations are based on various investigations done by the agency and some others as part of their anti-black money crackdown charter," ED Director Karnal Singh told PTI.

The ED teams also visited those who are allegedly connected to some of the most prominent corruption and black money cases being probed in the country at present.

The agency said it recovered documents and raided those dubious firms which were "used in the National Rural Health Mission (NRHM) scam to launder proceeds of crime".

It said the action was carried out against the operators allegedly used by ex-Noida Chief Engineer Yadav Singh "to convert his illegal wealth".

The agency also searched those companies allegedly related to Y S Jagan Mohan Reddy, Rajeshwar Exports and others to unearth their modus operandi.

The agency, in a statement, said it had come across various companies which were used with the objective to "conceal the nature, origin, or destination of misappropriated funds by concealing the beneficiary owner or proceed of crime generated out of corruption, fraud and other such crimes".

"Cases of foreign outward remittances of dubious nature by certain companies had also been detected. Investigations had revealed that certain entry operators and fraudsters were using network of companies some of which have been used repeatedly while some other were discarded after use or kept dormant for a long period," it said.

In a case in Kolkata, the ED said more than 50 companies had the same registered address which on verification was found to be a residential premises which was presently vacant.

"The landlord of the premises stated that he had let out the premises to a private individual around three years back and the said person had disappeared in three months and since then he has been receiving loan recovery letters against two companies registered at the said premise," it said.

Premises of a Chartered Accountant at Barakhamba Road in central Delhi was also searched and the sleuths found that he had "formed more than 200 shell companies and had given accommodation entries to a number of persons in Uttar Pradesh.

"He was also found to be involved in conversion of black money into white for some of the sand mafias of Uttar Pradesh," it said.

In Mumbai, the search teams landed on the premises of a company that had made "remittances to the tune of Rs 1,476 crore for import of diamonds which were grossly overvalued".

The ED is one of the members of a recently constituted central Special Task Force (STF) on shell firms that is co-chaired by the Revenue and Corporate Affairs secretaries.

They said the ED action is being carried out under the provisions of the Prevention of Money Laundering Act (PMLA) and the Foreign Exchange Management Act (FEMA) and added that some arrests and new FIRs could be made once the operations end.

The agency has also recently attached assets worth crores of such firms in over a week's time.

Shell companies are defined as those firms which are set up by nominal paid-up capital, high reserves and surplus on account of receipt of high share premium, investment in unlisted companies, no dividend income or high cash in hand.

Such firms are also characterised by having private companies as majority shareholders, low turnover and operating income, nominal expenses, nominal statutory payments and stock in trade and minimum fixed asset.

The ED added that the operations at some of the premises are still continuing and further investigations are "in progress."

The government had recently told Parliament that the Income Tax department has identified 1,155 shell companies which were used as conduits to launder money amounting to Rs 13,300 crore during three years to March, 2016.

"During last three financial years (2013-14 to 2015-16), investigations led to detection of more than 1,155 shell companies/entities which were used as conduits by over 22,000 beneficiaries. The amount involved in non-genuine transactions of such beneficiaries was more than Rs 13,300 crore," Minister of State for Finance Santosh Gangwar had said in a written reply in the Rajya Sabha.

A government statement in February this year had said that "in a small sample analysis" of such companies (shell), it has been found that Rs 1,238 crore cash has been deposited in these entities during November-December period (which includes the period of demonetisation).

"Harsh punitive actions will be taken against the deviant shell companies which will include freezing of bank accounts, striking off the names of dormant companies, invocation of Benami Transactions (Prohibition) Amendment Act, 2016," the government had said.