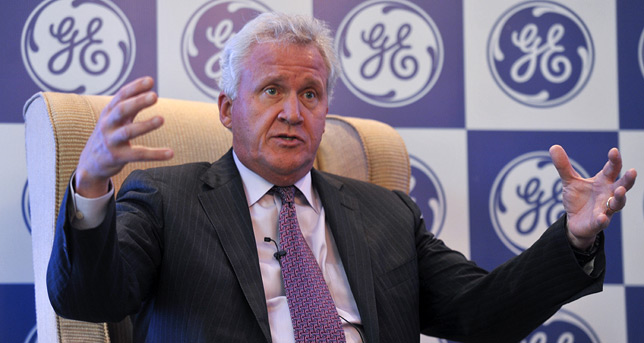 21 September, 2015
Print this article Font size -16+
Calling for measures to make it easier to do business in India, Chairman & CEO of US-based diversified conglomerate GE, Jeff Immelt, on Monday (21 September) said Prime Minister Narendra Modi's reform programmes need to be executed better and faster to attract overseas investors to India. He also said that GE will not invest in atomic energy in India until accident liability laws are brought in line with global rules.
"It is never easy but it is always fun (in India). As time goes on, we see great opportunities for a market of this size. We want it to be easier to do business with," Immelt said during an interaction with journalists here.
While giving a thumbs up to Modi, whom he met earlier in the day, Immelt said: "We believe that Prime Minister Modi's vision is the right vision and what we expect is just execution -- better execution, more execution, faster execution."
Stating that Modi's vision for the country makes it much 'more investible', he said: "I think it allows us to think of the country (for the) long term."
Reiterating that overseas investors are observing 'symbols' of real changes happening in India, Immelt said in his 33 years of association with GEand frequent trips to India this was the first time he actually felt things were really happening on the ground. 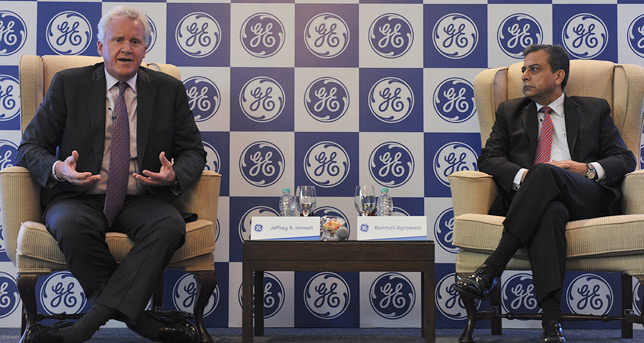 "This is, kind of, may be the fifth time, I personally have been on Indian real modernisation programme. I am an old hand on bidding for projects, this is the first time I actually think it is going to take place.
"So I view that is a giant symbol to the outside world to say there is real progress...There are big symbols outside investors are looking for where progress is made," he said.
Giving an example of the power sector where he would like to see reforms happening, Immelt said at some point of time there has to be "less subsidisation of local electricity prices" in India.
"... Have to go to more market pricing. That's going to allow reinvestment, that's going to allow more production," he said.
While acknowledging that it is an 'easy thing for a CEO to say but very hard thing to do politically', he said "those are the kind of things we would like to see."
He also pointed out the need to reduce bureaucracy and put aside the practice of "17 stamps on government document" in this digital age.
Immelt said "there are only a few things that is keeping the country (India) from being truly great. We are that are that close!"
He pointed out "few reforms, ability to get more into the villages; more healthcare, more electricity and more water to the people in the country" that would transform India.

GE Not To Invest In N-power In India
General Electric Co will not invest in atomic energy in India until accident liability laws are brought in line with global rules, Chairman Jeff Immelt said on Monday, in a setback for top-level efforts to get U.S. firms to build power stations.
Speaking shortly after a meeting with Prime Minister Narendra Modi, Immelt said India needed to "homogenize" its liability law with the rest of the world.
With the 1984 Bhopal gas tragedy still fresh in India's mind, parliament five years ago passed a law that makes equipment suppliers responsible for an accident, a deviation from international norms that companies found hard to swallow.
In January, Modi and U.S. President Barack Obama unveiled a plan centered on insurance aimed at breaking the stalemate, but India stopped short of softening the liability law. At the time, GE-Hitachi Nuclear Energy said it would review the governmental agreement in due course.
It appears to have fallen short of the company's requirements.
"I am not going to put my company at risk for anything -- there is no project that is worth it. We have to get common language on this," Immelt told reporters.
"There is an extremely standard liability regime that the rest of the world has adopted and as we go forward and think about investing, whatever happens has to homogenized between India and the rest of the world," he said.
Tags assigned to this article:
ge jeff immelt narendra modi reforms india