Wanderlust, With A Change 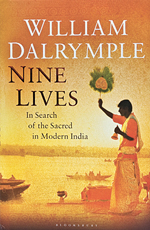 In Nine Lives (Bloomsbury), William Dalrymple traverses India and unearths nine astonishing, unheard of stories. The stories are diverse and riveting: a young woman who becomes a Jain muni, a theyyam dancer of Kerala who is both venerated and reviled by a casteist society, a Buddhist monk who takes up arms, a blind Baul from Bengal, and so on. Held together with humbling and unswerving but not blind faith, only made more powerful by brutally honest introspections, each reader is likely to be moved by some speakers more than others.

However, the subtitle of the book, In search of the sacred in modern India, while not entirely inaccurate, is rather more encompassing than the book's contents suggest. Some of the stories are so way out in what Wendy Doniger, whom Dalrymple thanks in his introduction, describes as "the farthest extremes of religious ecstasy", that a simple seeker of the spiritual is more likely to feel troubled than inspired.

There has also been a lot of talk about this book being Dalrymple's long-overdue foray into travel writing. The blurb tells us it is ‘his first travel book in a decade', but this reviewer found the plug a bit of a stretch. Yes, certainly, each story provides a nearly painterly rendition of its setting in Dalrymple's accomplished prose, but the often traumatic lives and esoteric spiritual experiences of the individuals profiled are clearly more prominent than the histories and geographies their narratives call forth. In truth, this book seems to fall somewhere between the ‘spirituality' and ‘travel' tags, but does not distinctly belong to either. Nor does it have to.