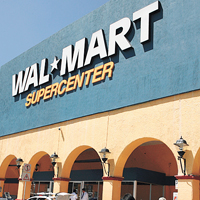 08 November, 2014
Print this article Font size -16+
A cash and carry joint venture between Wal-Mart Stores and Bharti Enterprises plans to add 3-5 stores by end of the year, a spokeswoman for the world's largest retailer said on 11 September' 2012.
US group Walmart operates 17 cash and carry, or wholesale stores, in India in partnership with Bharti Enterprises, which owns India's top mobile telecoms operator Bharti Airtel Ltd.
Foreign ownership regulations in India do not allow global hypermarket and supermarket chains such as Wal-Mart Stores Inc and Carrefour SA  to set up shops in the country and tap the over $450 billion retail market.
Foreign players are, however, allowed to operate wholesale stores.
In December last year, the government backtracked on its decision to allow such chains to own 51 percent in India's multi-brand retail sector after a huge political backlash.
Walmart also plans to ramp up the headcount at its unit, WalmartLabs, in Bangalore to about 200 by end 2012 from 125 now, Jermey King, Chief technical Officer of Global e-Commerce, Walmart.com, told reporters.
The unit's job is to help Wal-Mart capture more online sales from the proliferation of smartphones and social networking.