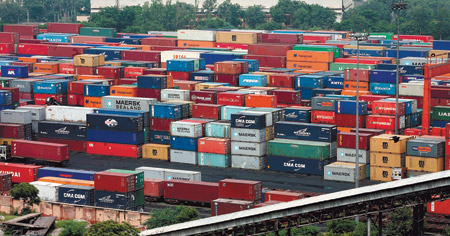 16 April, 2015
Print this article Font size -16+
Global goods trade will grow by 3.3 percent this year and by 4.0 percent in 2016, less than previously forecast, mainly due to sluggish economic growth, the World Trade Organisation said on Tuesday.
"We expect trade to continue its slow recovery but with economic growth still fragile and continued geopolitical tensions, this trend could easily be undermined," WTO Director-General Roberto Azevedo said.
The WTO figures are based on economic growth estimates from organisations including the International Monetary Fund, which will update its forecasts later on Tuesday. WTO chief economist Robert Koopman said the new IMF figures would be "in the same ballpark" and would not affect the WTO's forecast.