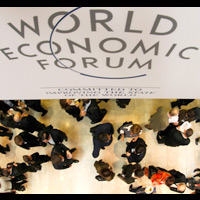 08 November, 2014
Print this article Font size -16+
Indian leaders are all set to showcase the country as an attractive investment destination, especially for retail and IT, at this year's WEF meet that began on 22 January at the snow-laden Swiss town amid uncertain global economic environment.

This year's edition of World Economic Forum (WEF) meet on the theme 'Resilient Dynamism' would see participation of high profile leaders like German Chancellor Angela Merkel. The meet is expected to mostly deliberate on ways to contain fiscal woes and boost global growth.

With Indian government moving ahead with reforms, retail sector is expected to be the eye candy from the Indian side.

'Its (India) is a land of land of billion opportunity with 260 per cent retail business growth by 2020,' read a banner on city buses. The banner, put out by the India Brand Equity Foundation (IBEF) also reflects optimism over FDI in retail, mainly after the government on Monday approved Swedish major IKEA's Rs 10,000 crore investment proposal.

At the same time, Infosys, TCS, Wipro, HCL and Mahindra Satyam, among others, would present the country's potential in the growing IT sector. Ambani, Mahindra and other businessmen would assert the growth potential offered by India for investors in various other sectors.

Among the galaxy of global leaders like British Prime Minister David Cameron and Russian Prime Minister Dmitry Medvedev, heads of World Bank, IMF and CEOs of many blue-chip firms would be in attendance.


After approving Swedish major IKEA's Rs 10,000 crore investment proposal, Anand Sharma on Monday had said the decision would "resonate not only in Davos but in the all major countries of the world".

The Indian delegation, comprising of about 100 business and political leaders, is headed by Union Minister Kamal Nath, who emerged as one of the key strategists in the passage of contentious retail FDI bill in Parliament last month.

Representatives of world's largest retailer Walmart are also present at the WEF meet.

Apart from exchanging views on continuing financial turmoil in the US and euro zone as well as recent developments in the African continent, the WEF meet would deliberate on finding avenues to revive global growth and create more jobs.

This edition of WEF meet is anticipated to host over 1,500 top leaders and thousands of others including spouses of rich and powerful, journalists and support staff.

The streets of Davos are brimming full of huge banners put out by various nations including India and Russia, all of them pushing themselves as attractive investment destinations.

Meanwhile, anti-WEF protesters have also pitched their tents in the snowy ambience.

Providing room for optimism, a WEF survey yesterday had said that sentiments about global economy improved in the 2013 first quarter, primarily due to positive signs debt-laden euro zone and hopes that worst fears about US debt turmoil would be allayed.